One of the high points of cooking is the chance to combine butter and flour. Add a bit of water, maybe salt, maybe yeast -- all very simple, but with the right techniques amazing things result. With five-minutes, and the right temperatures, you get delicate, flaky pie crusts; with yeast and a lot of time and effort, croissants are born. In between is a rolled pastry crust that I discovered recently that takes advantage of techniques from both ends of the spectrum.

Published in Cook's Illustrated ( January-February 2012 issue), I also found it on-line in a slightly different version. In both places it was being used for a galette, an open-faced tart that can be filled and topped with veggies, or can go sweet with fruits. Custards (eggs and milk combinations) sometimes add to the fillings, binding the ingredients, and giving extra richness. The pastry starts with more of a pie crust approach, cutting in very cold chunks of butter to flour. It switches to a croissant or puff pastry approach by then chilling the dough, and rolling it out, then folding and rolling, folding and rolling, until it's a many-layered splendor. A final chilling and rolling gives a flaky puff pastry crust with a buttery croissant taste.

My filling used a mix of sauteed and roasted vegetables -- roasted cauliflower and roasted red peppers with sauteed onions and garlic. Fresh frozen peas from the Matanuska Valley, tossed in just before baking the galette, provided color and summer flavor. I experimented with the cheese filling/binder as well, using a half cup of ricotta, a quarter cup of parmesan, and a quarter cup of heavy whipping cream. Next time I'll make more cheese,using 3/4 or a full cup of ricotta, a little more parmesan, and enough more whipping cream to give it all a slightly flowing consistency.

Here's the pastry dough recipe, quoted from the Macheesmo site, with my notes added in brackets:

A March evening in Alaska -- one right setting for a galette. 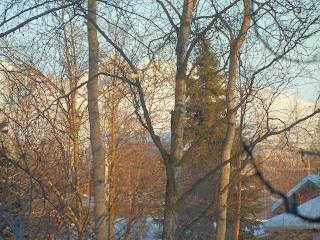 London Breads Around the Town


London had as many delicious breads as Barcelona, although the settings were not as elegantly Art Noveau (in Spain, called "Modernisme"). Here are a few:


These first three are from the Food Halls at Harrod's. 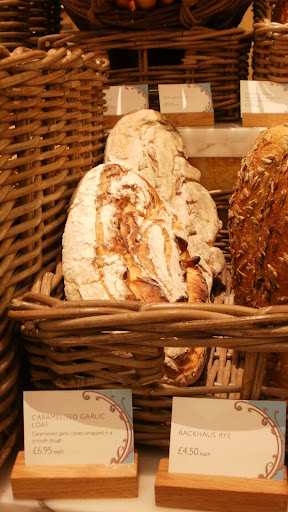 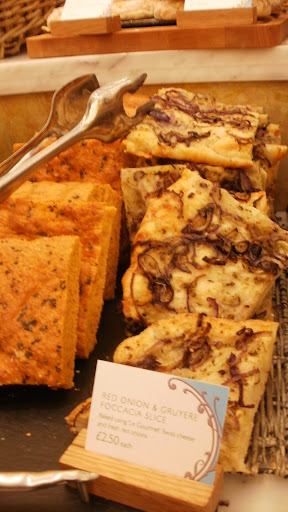 Breads and pastries in the Harrod's Food Halls. 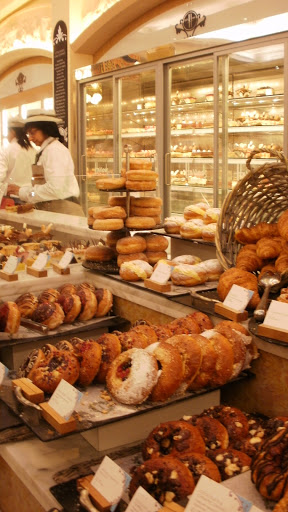 A cake in a pastry shop in the Covered Market in Oxford. 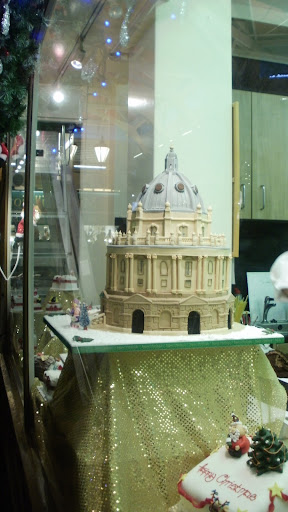 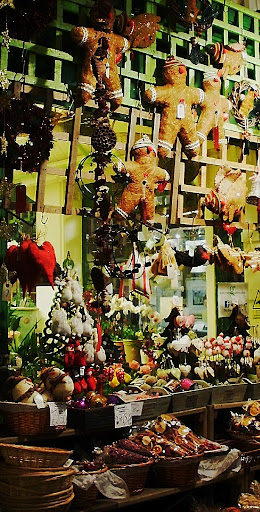 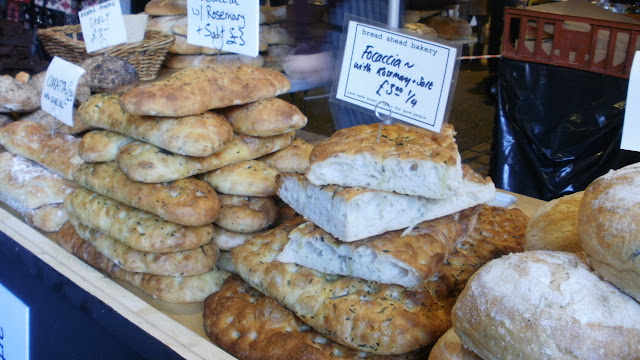 Cheeses at the Borough Market, to go with your bread. 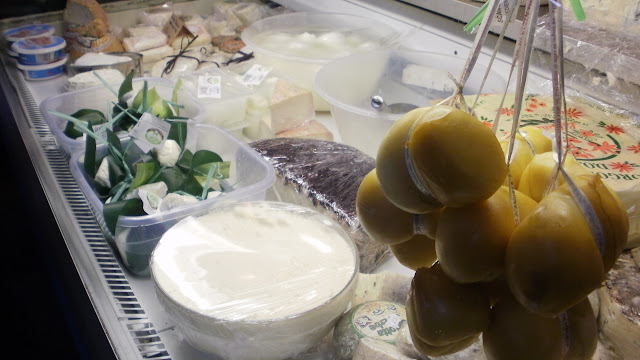 Pigeons near the Borough Market, eager for some bread crumbs. 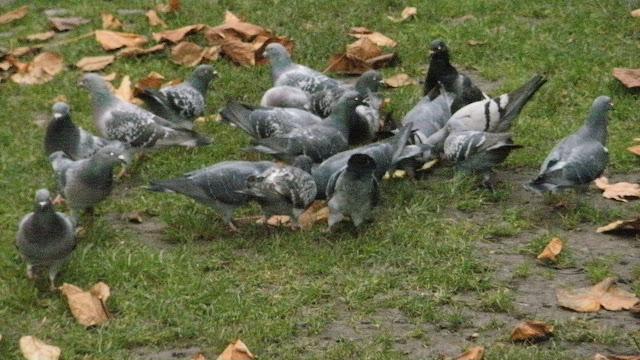 Barcelona is noted for chocolate, the 1992 Summer Olympics (and for wanting to be a contender for the Winter Olympics a few years hence; it is building an indoor ski resort, harvesting the cold from the transport of liquified natural gas to make the snow), and Gaudi's buildings variously described as hallucinogenic, bizarre, and world treasures. It also has one of the world's great street markets all along Las Ramblas, and bakeries everywhere. Our November 2011 two weeks there had more than its fair share of rain, but plenty of chances to sample breads and pastries that could hold their own compared to  any place in Europe.

My favorites were whole wheat croissants topped with toasted sesame seeds sold from Rocamora Forns, a small shop across the narrow alley from the St. Josep Market. We often were there too late to buy any -- I wasn't the only one in Barcelona who loved them. Many of the regular croissants were finished off with a sweet glaze, not to my taste. The breads were delicious too, and came in a full range from seed-chocked health foods to delicate white breads with thin crackling brown crusts.

The "peasant bread," "pan de tomate," was made with a ciabatta-like white bread, sliced thin and sometimes toasted. First, it's rubbed with a cut clove of garlic, then with a halved tomato, so that some of the pulp is left on the rough surface, and finally drizzled with olive oil. With luck, and a good enough restaurant, the waiter brings the makings, prepares the first slice before you as an example, and then leaves you to do the rubbing and drizzling yourself for the remainder. You get to do all of the eating, too. It was one of the best things in any bar or cafe, and also one of the cheapest. 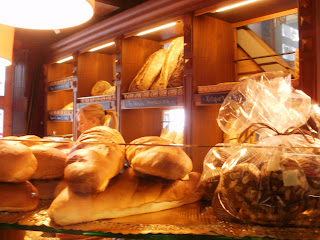 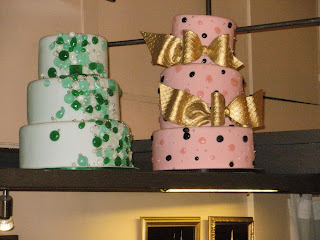 A day's haul -- cookies, a min-chocolate croissant,a roll to eat with butter and cheese. 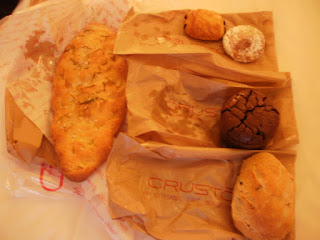 A fruit tart, glazed, and centered with cherries. 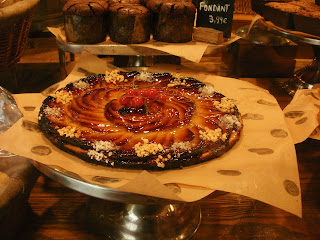 Barcelona bakery, with a variety of naturally yeasted breads. 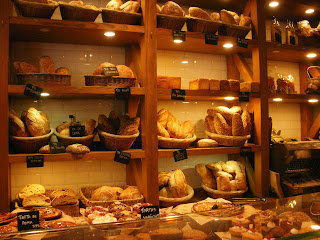 Presentation is all: a carrot cake; brownies, up by the peppers and potatoes on the top shelf, croissants at the lower left in a flower pot. Pastry shop in L'Eixample. 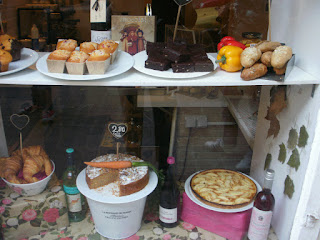 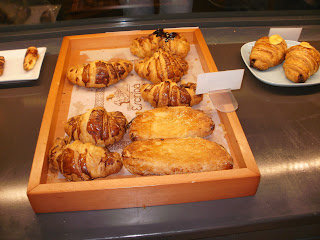 The pastry shop in the St. Josep Market off Las Ramblas, that is home to the whole wheat croissants. 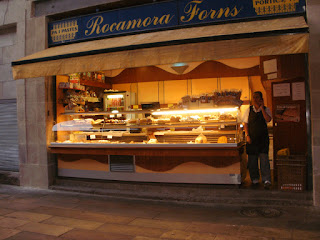 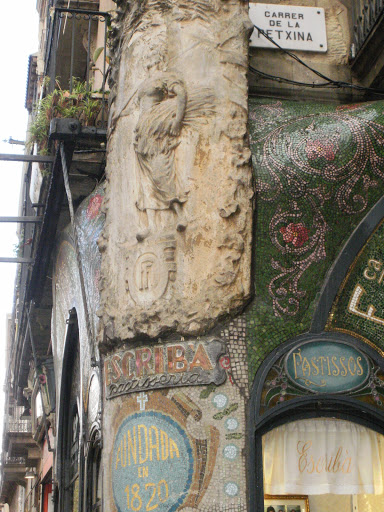