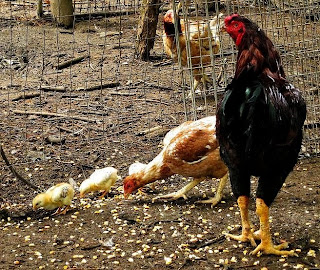 Chickens eating corn because wheat is too expensive in Michigan [Photo, Micki Glueckert].

The harvest continues in Berrien County in the Southwest corner of Michigan. Our local correspondent Micki Glueckert got photos. 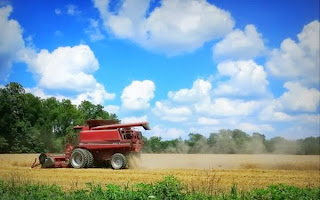 
Micki says, "Caught one guy harvesting yesterday. A lot of the other fields must have been done earlier; I thought they would wait another day because we had had so much rain."

"I asked the guy who owns Buchanan Feed Mill why they round baled the straw. He said the big dairy farms bale the straw after the wheat is harvested in round bales, drop them in a big hopper that chops the straw up and mixes it in their feed which is I believe a high protein feed that needs some fiber added.  The straw has no nutritive value but slows the feed down so the gut can extract more good stuff from the feed. Some guys also drop a bale in a chopper that shreds the straw and blows it around the barn, for bedding. It makes a lot less work with the big round bales. I remember our neighbor trying round bales of hay for the horses. They they didn't like it, and the neighbor needed a chainsaw to cut them up as you couldn't just pull the hay out without a great deal of work."
Posted by Teri at 10:57 PM No comments: 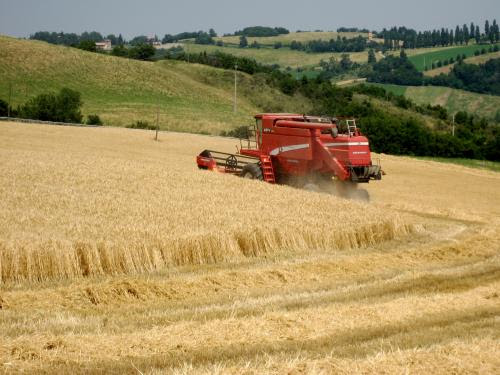 As of July 14, 2013, the wheat harvest around the country was progressing well.

In Michigan, winter wheat was producing at about 92 bushels an acre in Ottawa County by July 14, 2013. The photo is from Berrien County, where wheat is grown mostly for feed for livestock. 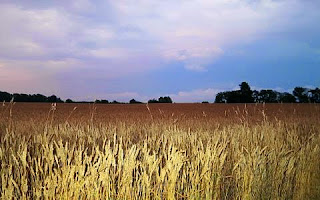 In Ohio, the July 14 yield was about 71 bushels per acre in Erie County (closest county to Ottawa County, Ohio, where the photo was taken). 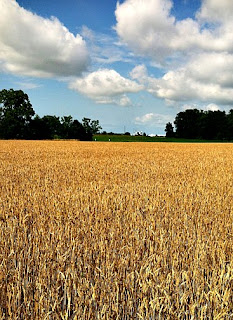 From National Association of Wheat Growers, one important piece of news is that South Korea has satisfied itself that U.S. wheat does not contain any genetically modified grain. This had become an issue in April when GMO wheat from Monsanto was discovered growing in an Oregon wheat field. Because Monsanto had stopped testing that strain of seed about ten years earlier, no-one had a good explanation for its presence, causing concerns that other U.S. fields could be contaminated.

The National Association of Wheat Growers also reported on national statistics for the year to date. Bottom line: although wheat was selling in June on the commodities markets for $7.13/bushel, $.55 less than in May, the price was still $.43 better than the June 2012 market. One percent more acreage was planted in 2013 than in 2012. The winter wheat harvest was a little behind schedule this year, and the spring wheat growth was also a bit slow.

The New York Times, a week ago, picked up a Reuters piece about the possible merger of Cargill and ConAgra wheat milling operations, that would "control about one-third of U.S. capacity, dwarfing all competitors in size and market reach."  . . .  Not all U.S. wheat is processed within the country of course. The U.S. Department of Agriculture estimated that "958 million bushels of U.S. wheat will be used for food in the 2013/14 marketing year, which started on June 1, while 975 million bushels will be exported." Nonetheless, the proposed merger would give the new joint venture about one-third of the market, and leave the next largest market share in the hands of Archer Daniels Midland Co. with its current 17% of the wheat milling capacity in the U.S. 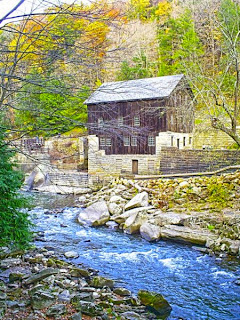 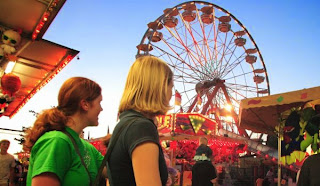 For as long as people have harvested crops, they have held festivals to celebrate. Today's county fairs are the direct descendants of the most ancient events. From that day to this, parades and processions, crownings (then of the gods or saints, now of the queen and king of the event), displays of the finest fruits of the harvest, and singing and dancing rule the day. Tractor pulls weren't featured in ancient Greece, but they must have had something noisy.

Some of the older traditions included: 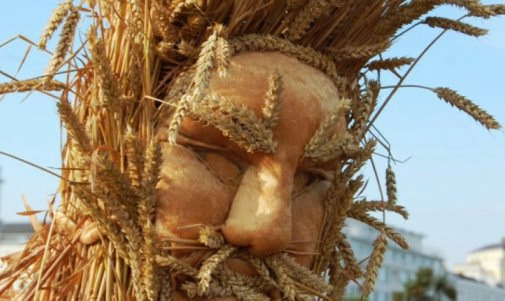 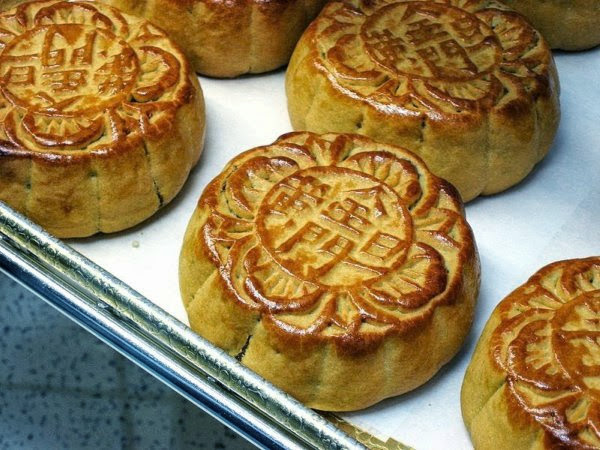 People didn't limit themselves to just one feast, of course -- they started in the spring with the planting and continued right on through until the last of the crops were stored away for the winter. In the United States, the wheat beer festivals were all in May, so we've missed those for this year. But here are a few wheat festivals coming up during the next few months.

A child in Lupara with wheat and pretend scythe. 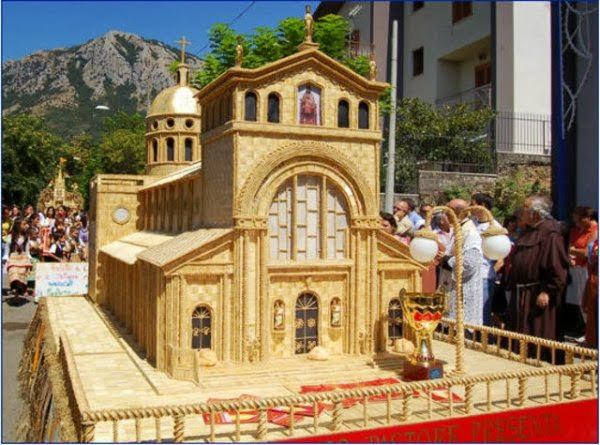 A float in Jelsi, with basilica made of wheat.

This year's theme is "folk wisdoms and legends in the Brie area." The events are fewer than in Kansas, but the town promises a parade of wheat-decorated floats, folk dancing, "old-style threshing," a fun fair, and ""jazz and world music." It's free on Saturday, but costs 10 euros on Sunday; kids under 12 are free. The FaceBook page says that people decorate their homes and shops with wheat and wildflowers. They demonstrate the threshing, milling and baking (and one presumes that there's plenty of good French bread to eat at the end of this). The city itself is a UNESCO World Heritage site because of its well-preserved medieval buildings, and there's plenty else to do besides celebrate the wheat harvest.

A photo from about 100 years ago, a re-enactment of the story of Ruth (traditionally read on the holiday) in Israel. 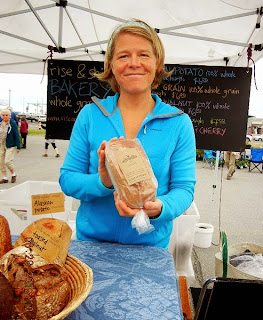 Alison Arians shows off a fresh-baked loaf of Rise&Shine bread at the South Anchorage Farmers' Market.

Here's a sampling of what's wheaten from Anchorage Farmers' Markets at the end of June, 2013: 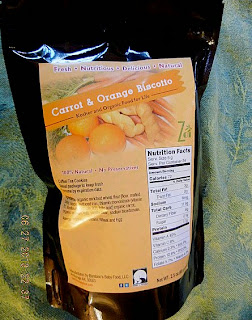 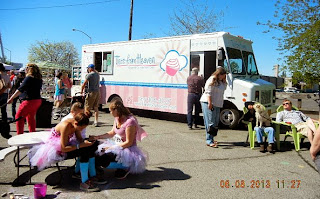 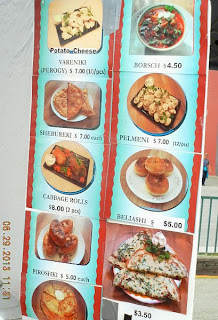 At the Anchorage Framers' Market, Parking lot of Central Lutheran Church at 15th and Cordova: 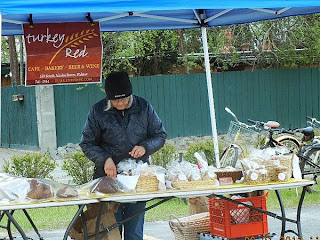 Downtown, at Third Avenue between C and E Streets, the Anchorage Market and Festival every Saturday is the place to go for things made with wheat -- funnel cakes,wraps, empanadas, and more. 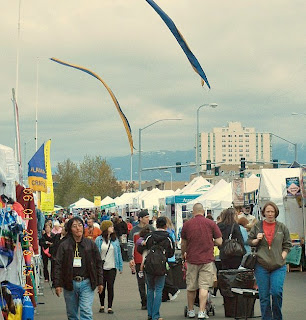 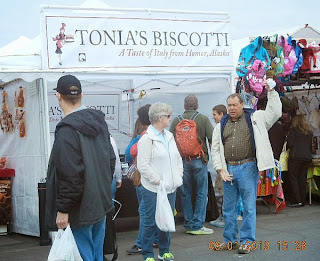 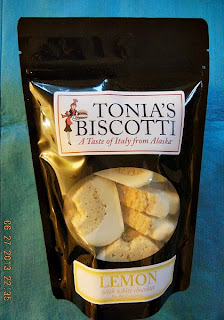 At the South Anchorage Farmers' Market, in the parking lot of the Subway/Cellular Sports Centre at the corner of Old Seward Highway and O'Malley Road: 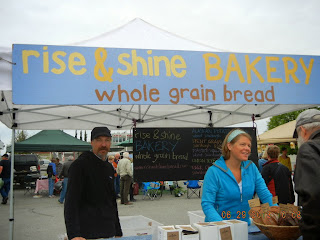 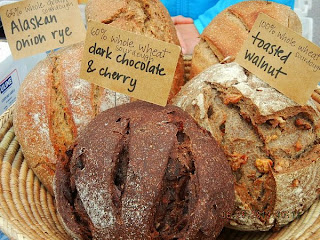 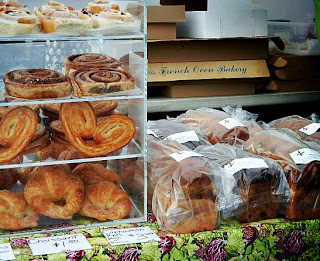 For up to date information about the markets each week, track their offerings at Market Fresh on the Anchorage Daily News website.

South Anchorage  Farmers Market  has a newsletter and web site that you can check for announcements, recipes, notes about vendors each week, and photos. 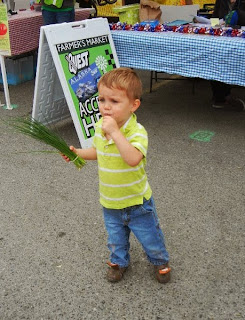 A young customer samples the goods at the Spenard Farmers Market .