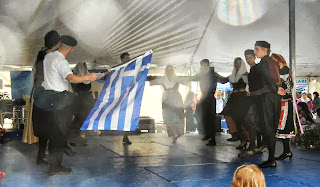 The Greek flag is featured at the first dance of the day at the Holy Transfiguration Greek Festival in Anchorage, Alaska [August 16, 2013].

It might be the farthest north Greek Festival in North America. The Holy Transfiguration Church in Anchorage has hosted a festival for the community for many years at their church on the slopes of the Chugach mountains. This year's event celebrates the progress on the congregation's new church, due to be opened by May of 2014. A friend and I spent a sunny Saturday afternoon indulging in home-made Greek food, listening to the pastor describe the work being done on the church, and watching a demonstration of how to make the same baklava that we had enjoyed earlier.

Like Greek festivals throughout the United States, this one raises money for the church. Admission and parking are free, and the all-home-made food is extremely reasonably priced. A car is being raffled off at the entrance, and one of the several tents houses a selection of Greek foodstuffs, jewelry, and clothing. The bookstore in the basement of the church offers icons and children's books, and a silent auction has temptations ranging from cooking lessons to Greek olive oil and pottery.

We started with the food, spanikopita and tiropita, at $2 each, or two for $3. They are made of filo dough, the thin wheat sheets often found in Greek and Middle Eastern cooking, wrapped around savory fillings. "Pita" is the Greek word for "pie," and spanikopita means spinach pie. Tiropitas are stuffed with feta cheese. We bought a few and settled in at a table under a tent to consume them. Hot, crispy, and subtly seasoned, they prepared us for the baklava to come. 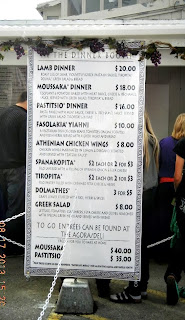 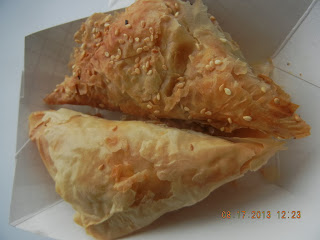 Tiropitas, plain, and spanikopita sprinkled with toasted sesame seeds were made by the church members between March and August, then frozen to be served at the festival.

Next came the baklava, one of a dozen  pastries and cookies offered to top off the meal. You could also buy baklava ice cream, ice cream topped with the bits of the baked confection trimmed off to make the neat triangles shown below. 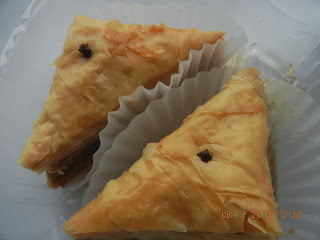 Baklava, each one's flaky topping pinned down with a clove. 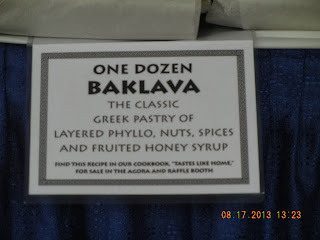 We looked through the goods in the "agora," a tent for foods and trinkets, and the icons and books in the bookstore. 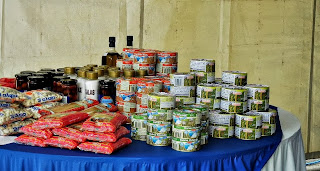 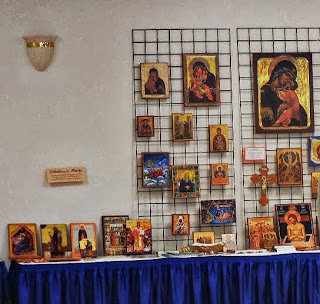 The bookstore, with dozens of icons for sale.

The first scheduled event (food was always available) was a tour of the church. Fr. Vasily Hillhouse, the pastor, spent a half hour describing the meaning of the church's shape, colors, and icons. It's built in the traditional shape, a cross, with the altar at the east end of the building. The entry way is separate from the main room, to give people a space to shed their boots, coats and earthly cares before they enter into the sanctuary. The main room is topped with a blue-painted dome that represents heaven, the same shade of blue found in the Greek flag. All around are painted icons representing the authors of the gospels, and dozens of saints. Fr. Hillhouse emphasized the two thousand years of traditions that framed and filled the liturgy and beliefs of the Greek Orthodox Church. 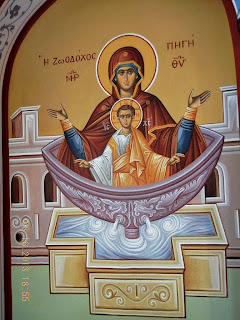 At the front of the church behind the altar is Mary, Theotokos, "the one who gives birth to God." 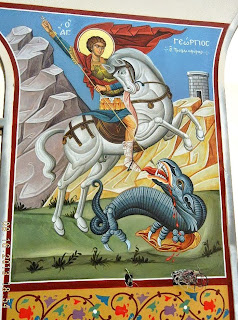 On one side of the front door is Saint George (the patron of Greece).

One of the people listening to Fr. Hillhouse's explanation of the icons asked whether there were any icons painted from the real saints. The priest explained that icons deliberately are not meant to look like any actual person. The artist intends to show the spiritual dimension of the saint, hence the halos and the stylized faces.

Next came the demonstration of how to make the baklava that we had just enjoyed. Laurie Constantino, local cookbook author (Tastes Like Home, a book of Mediterranean recipes whose proceeds benefit the church), buttered sheet after sheet of delicate paper-thin wheat filo (or phylllo) dough. She stacked them on a baking sheet -- "Don't worry about tearing them," she advised the crowd who showed up to watch. "The baklava will turn out just fine. It's very forgiving." She spread a walnut mixture on top of the layers, then put a few more sheets of filo, more walnut mix, more filo. About half-way through, she crumpled several sheets slightly and set them atop a layer of nuts, before adding more layers of filo and topping. "This gives the baklava dimension, and keeps it airy." 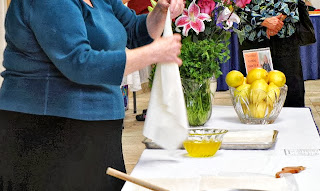 Layering the first sheets of filo onto the baking pan.

After the top buttered layer has been laid on, it was time to score the pastry half-way through to make it possible to cut neatly later. To keep the top layer in place while the baklava is baking, a clove pins it down on each piece. 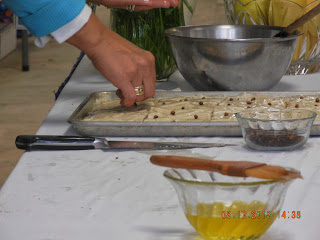 Maria Baskous stops by and adds cloves to the baklava, after cutting the pastry into the shapes it will have after baking.

The recipe published in Laurie's book and used for all of the baklava at the festival comes from Maria Baskous's mother who owned a bakery in Greece. Maria grew up pinning baklava together with cloves, and absorbing the traditions and knowledge of Greek foods. "This church is built of baklava," she said. "We started in March and made ten thousand pieces to freeze for the festival. We make it at Christmas too, and all of the proceeds go to finish the work on the building."

Finally, the dancers came on stage under the big tent. A group of children danced first, wearing traditional costumes from different regions. 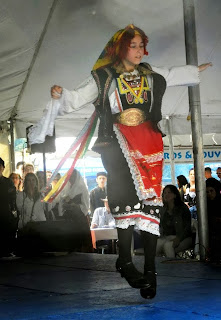 The young girl dancers had ribbon streamers from their scarves, and some carried lace handkerchiefs to flourish. 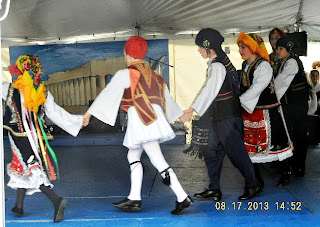 Some of the boys wore kilts, like those we saw on the official guards in Athens. 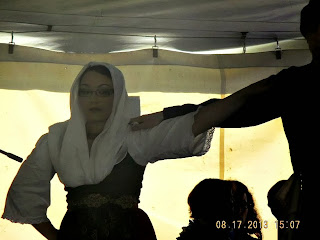 All of the dancers covered their heads, the young girls with bright scarves and all of the women with white veils. The boys and men all boasted jaunty fishermen's hats or stiff caps with tassels. 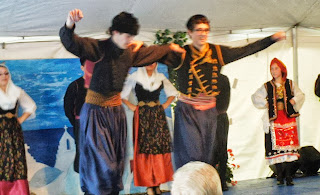 The women wore patterned aprons over their full skirts. Men had short jackets and bloomers. 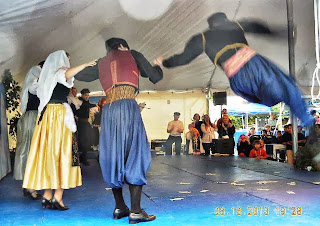 High kicks were the order of the day for the men. 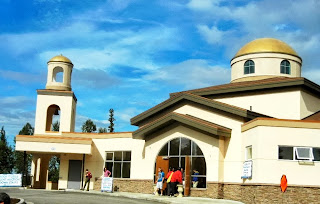 The church awaits the crosses for its domes; they will be added when the work inside is complete. 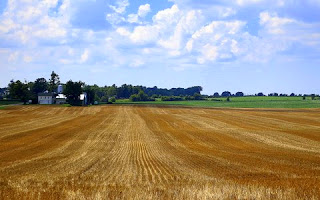 "At Portage Prairie,  . . . a continuous field of wheat and corn stretched away . . . scarce broken by even a tree or a house and seemingly as wide as the ocean. . . . We returned to town delighted and astonished by the beauty of our neighborhood." 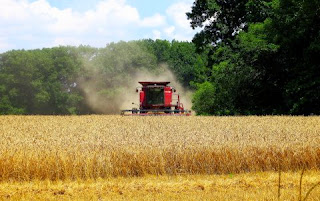 The quote from the July 19, 1838 Niles, Michigan Intelligencer* describes land that just a few years earlier had been part of the great "Galien Woods" filled with walnut, oaks, and maples. In 2013, one hundred and seventy-five years later, much of the county has gone back to woodlands or been planted in orchards and vineyards. The fields that stretch along the country roads still grow corn, but much more soy than wheat fills the acres. At the end of July, 2013, My sister Micki, husband Jim and I set off along the same back roads to photograph the fields of wheat that had just been harvested. 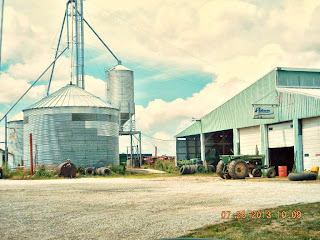 The land doesn't rest for long. Micki pointed out that some of the winter wheat fields had been planted with soybeans, for a second crop during the season, as well as to replenish the nitrogen in the soil. 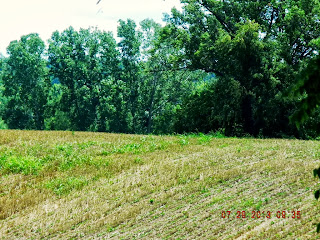 A wheat field that was harvested a few weeks ago has had soybeans planted in the rows for a second crop for this year. [Teri Carns photo, July 29, 2013] 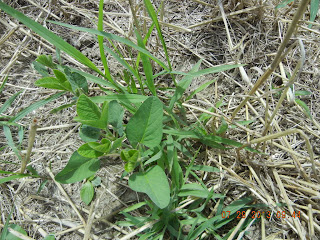 Another sight along the small roads was the Mt. Zion cemetery. 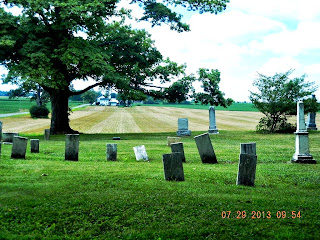 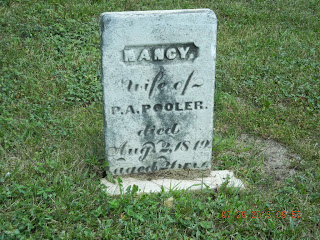 Further down the road we found a field with cattle, and nursing calves. Much of the wheat grown in the area is used for feeding livestock. Micki says that wheat is too expensive for the poultry that they raise; the birds must settle for corn. 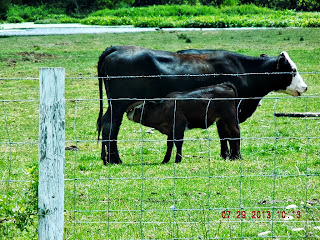 For dinner that evening, we had homemade noodles, with flour from someone else's fields. 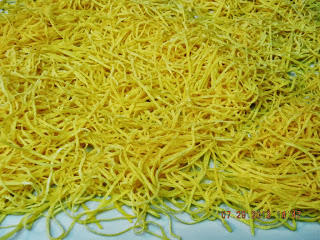 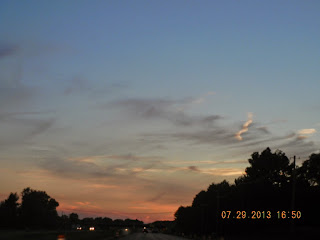 * The quote was taken from Walter Hawes, Story of Buchanan, re-published in the August 8, 2013 Berrien County Record.
Posted by Teri at 12:08 AM No comments: