Sour cream and chocolate chips -- a tale of two sweets 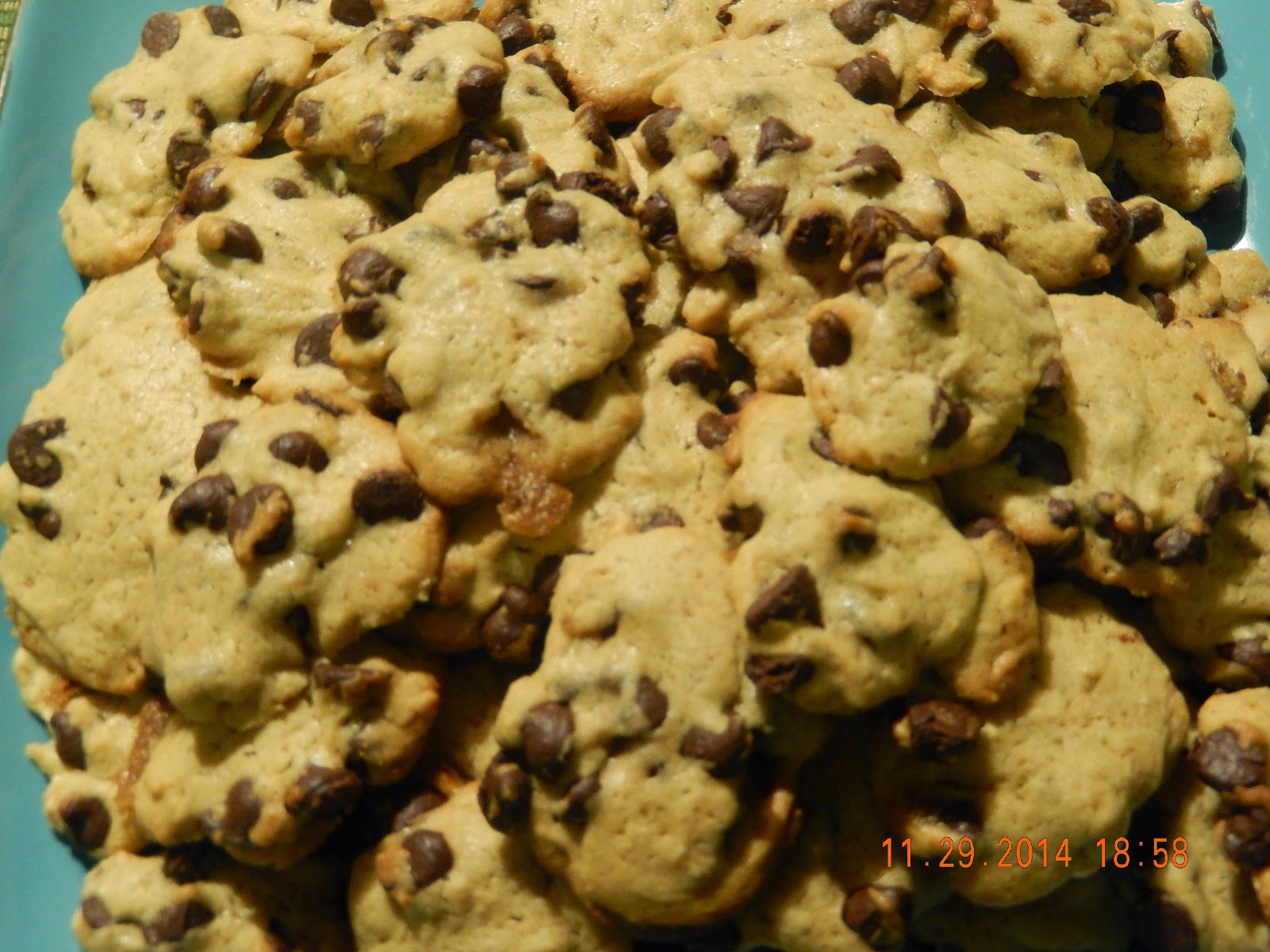 
It was the best of days. It was the worst of days. In Anchorage, the first two inches of snow for the season meant  joy for some, and sorrow for others. In 1971 when the snow fell during our first October in Alaska, one of us curled up under the covers and hid for the rest of the day. Others went out and made snow angels and built as many snow people as the thin coating would allow. Having grown up in the Southwest corner of Michigan, snow is a fact of life, met with a smile (it's beautiful) and a sigh (it's cold and slick and has to be cleaned up). 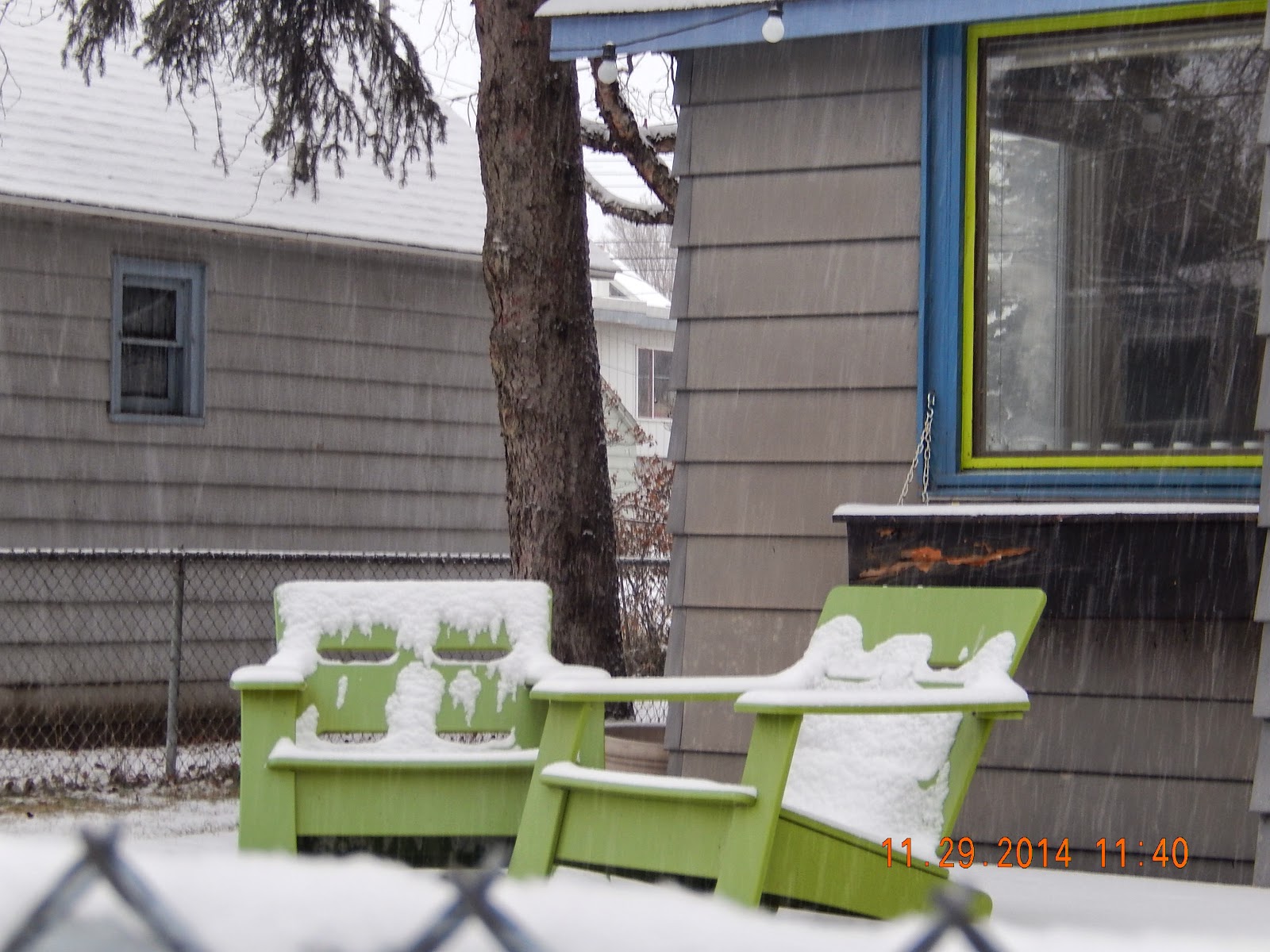 No more sitting out on the front porch for the next few months.


So when the snow started coming down yesterday morning, Jim and I spent a while walking through the damp fine flakes, and then settled in for the afternoon at home. I filled the bird feeders and put them out (Anchorage law forbids putting bird seed out before the bears have gone to bed -- the first snow is generally considered to mark that day). Then I turned my attention to left over sour cream that had to be used soon. But how to decide between chocolate chip cookies and sour cream/caramel brownies? No way to do that, so I made both.

1/2 cup butter, slightly browned (melt over low heat, stirring, until just turning brown around the edges of the liquid)

Cream the butter and sugar thoroughly. Mix in sour cream and vanilla. then beat in the egg.

Whisk the flour and salt together in a separate bowl.

Add flour and salt to butter-sugar-egg-sour cream mixture and combine until an even color.

Bake for 10 to 12 minutes, until just beginning to show a hint of brown around the edges. 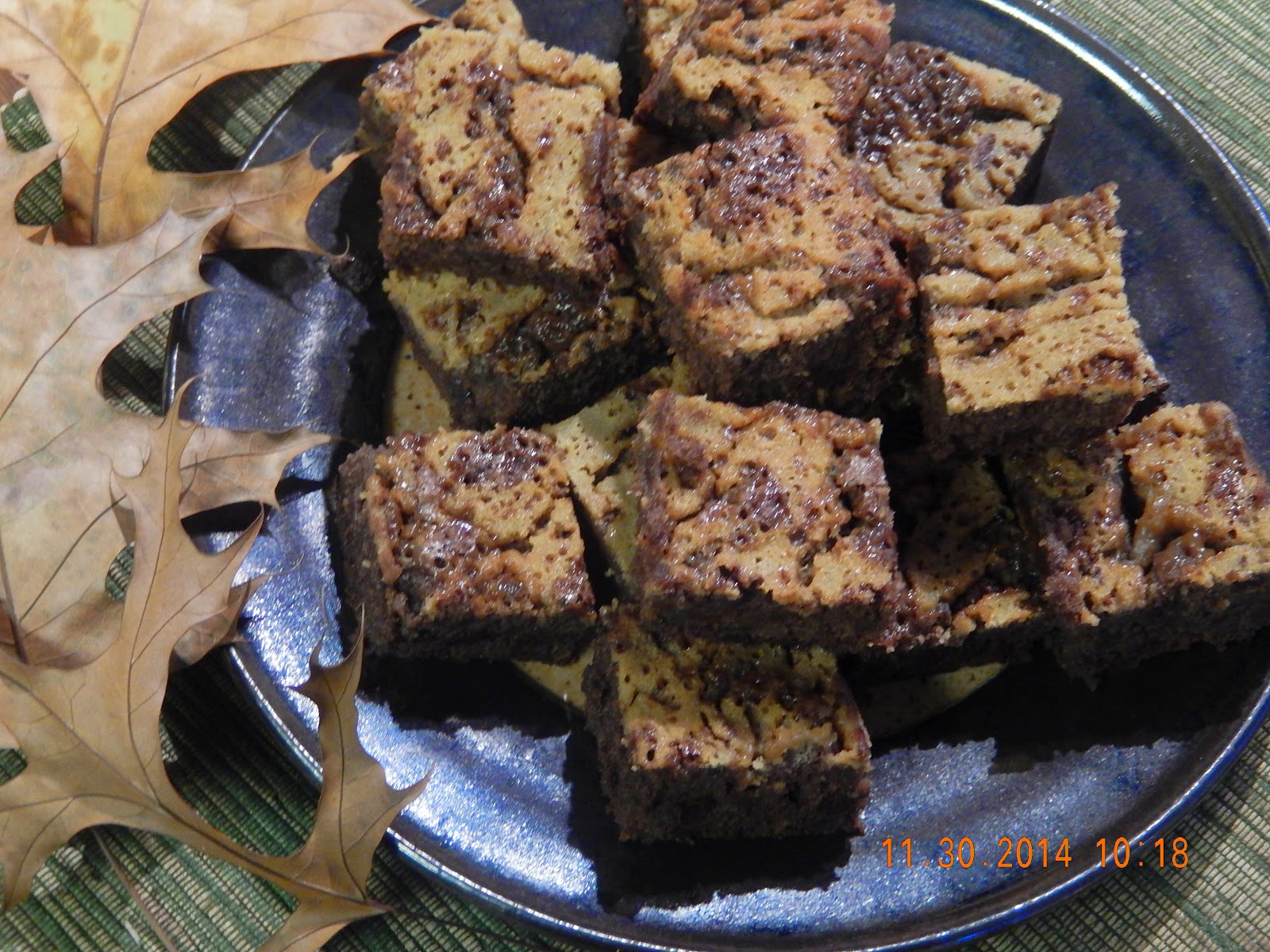 This recipe was adapted from Bakeaholic Mama's sour cream espresso brownies with salted caramels. I used homemade caramel sauce blended into the sour cream mixture, and added a cup and a half of chocolate chips instead of using the salted caramel chips.

Preheat the oven to 350 degrees.

Butter or oil a nine-inch by thirteen-inch, two-inch deep baking pan, and line with parchment paper.

Stir well in a medium bowl, and set aside.

1/2 cup of caramel sauce for drizzling


Whisk the eggs, brown sugar, granulated sugar, vanilla, and salt together. Slowly whisk in the melted butter (pour in a bit at a time, then whisk -- the idea is to not have the butter so hot that the eggs start to cook).

In a separate bowl, stir the flour, cocoa, and espresso powder together.

Combine the flour mixture with the liquid batter. Fold in the chocolate chips.

Pour the brownie mix into the prepared baking pan. Pour the sour cream mixture over the top. Using a knife, swirl the layers together. Drizzle a half-cup of caramel sauce over the top. 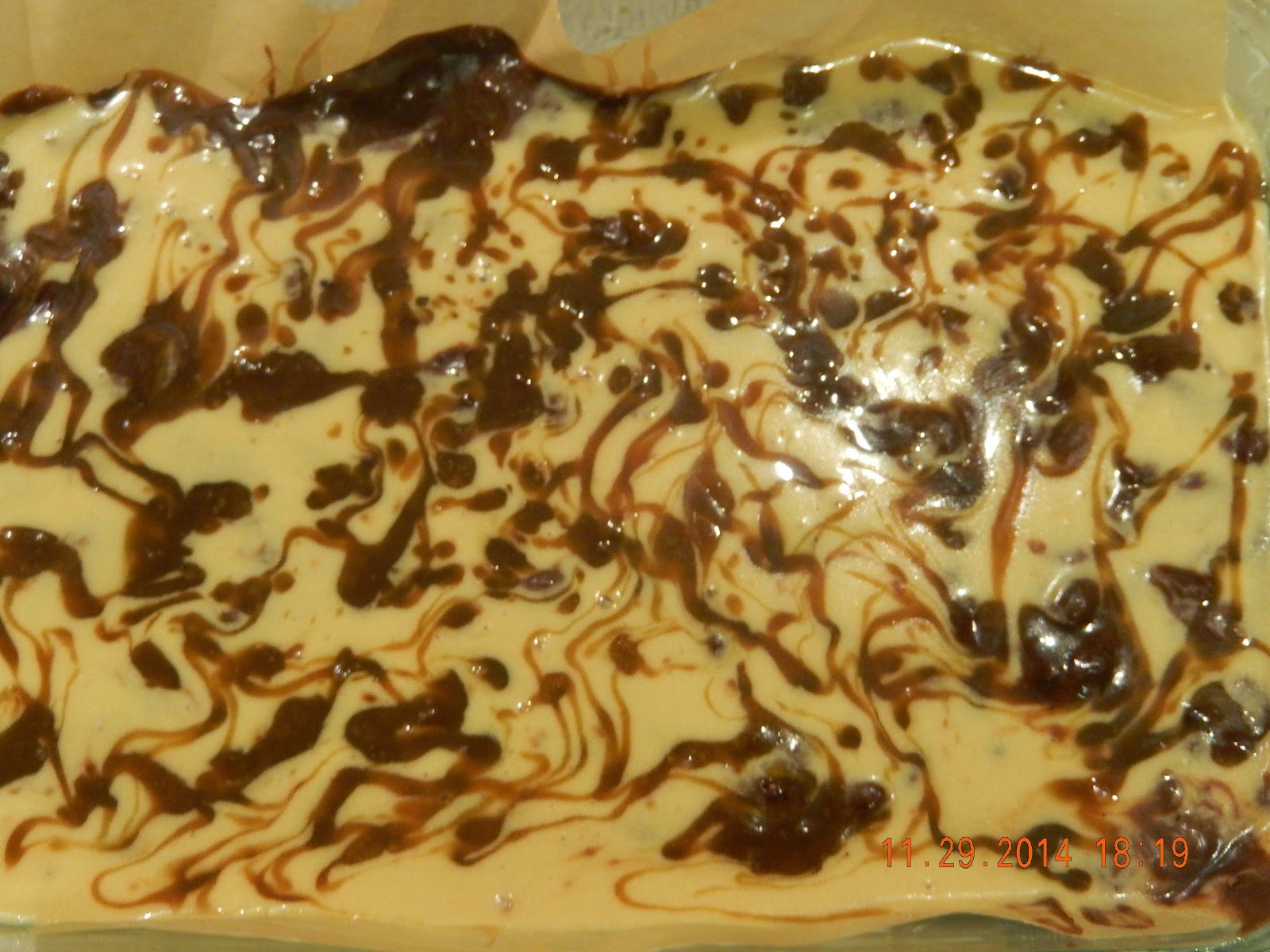 Brownies, ready for the oven, with the caramel drizzled over.


Bake for 35 to 45 minutes (depends on your oven) until a toothpick pushed into the middle of the brownies comes out clean.

Cool for at least one-half hour before cutting (OK, I didn't wait that long before tasting, but to cut them evenly you need to let them cool for a while). Cut small pieces -- these are very rich. I am going to try freezing some of them to eat during the holidays. 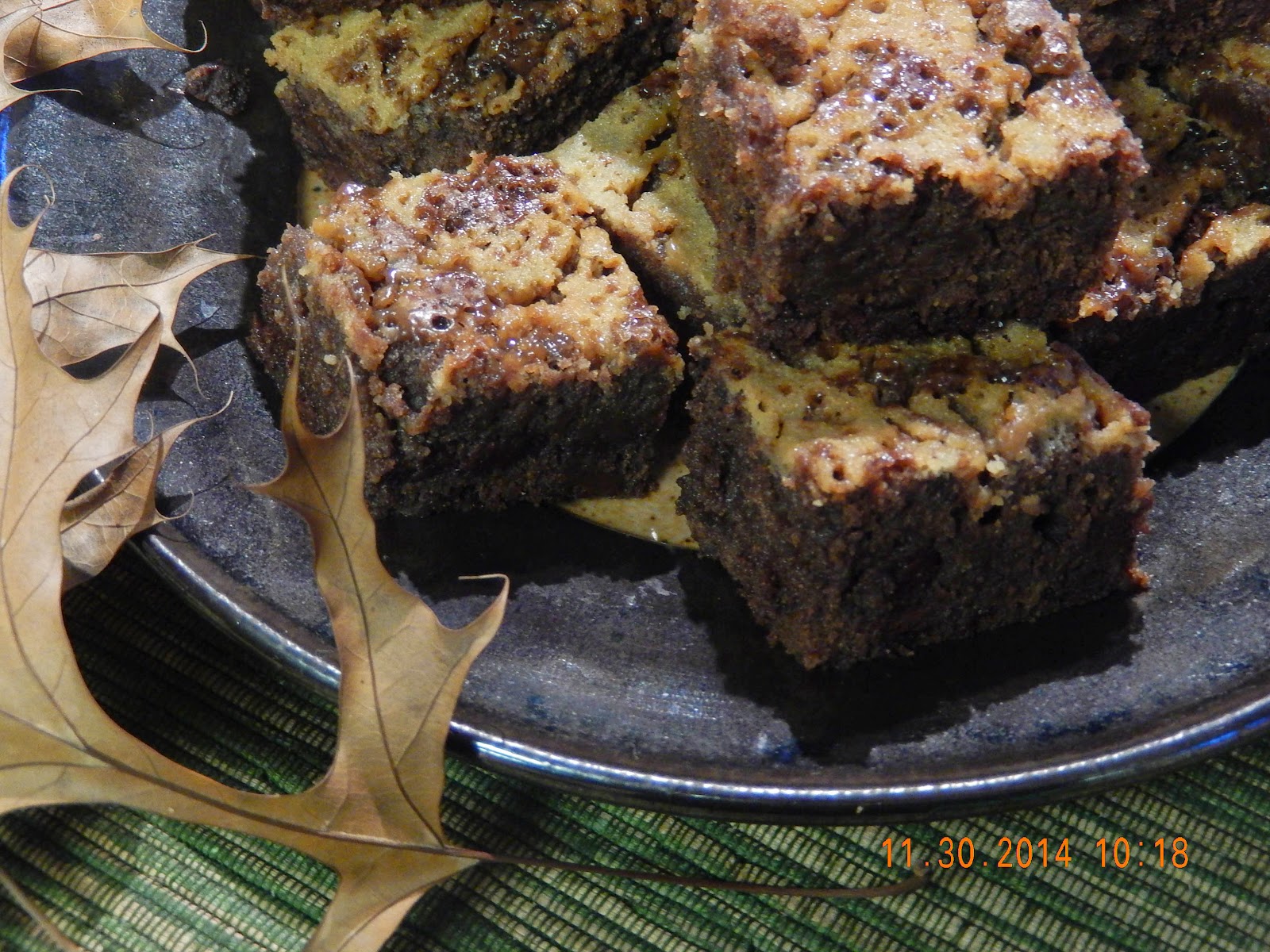 Melt 1/2 cup of butter in a quart or two-quart pot. Stir in 1 1/4 cups of firmly-packed brown sugar and 2 Tablespoons of corn syrup (the corn syrup keeps sugar crystals from forming and gives the sauce a better texture). Bring to a boil, and boil for one minute. Turn down the heat a bit if needed to keep the pot from boiling over. After one minute, take the sauce off the heat and pour in 1/2 cup heavy whipping cream. Heat until boiling again, then turn off heat. Let cool. This keeps in jars in the refrigerator for several months, and is good on almost anything (haven't tried it on kale, but don't know why it wouldn't work). 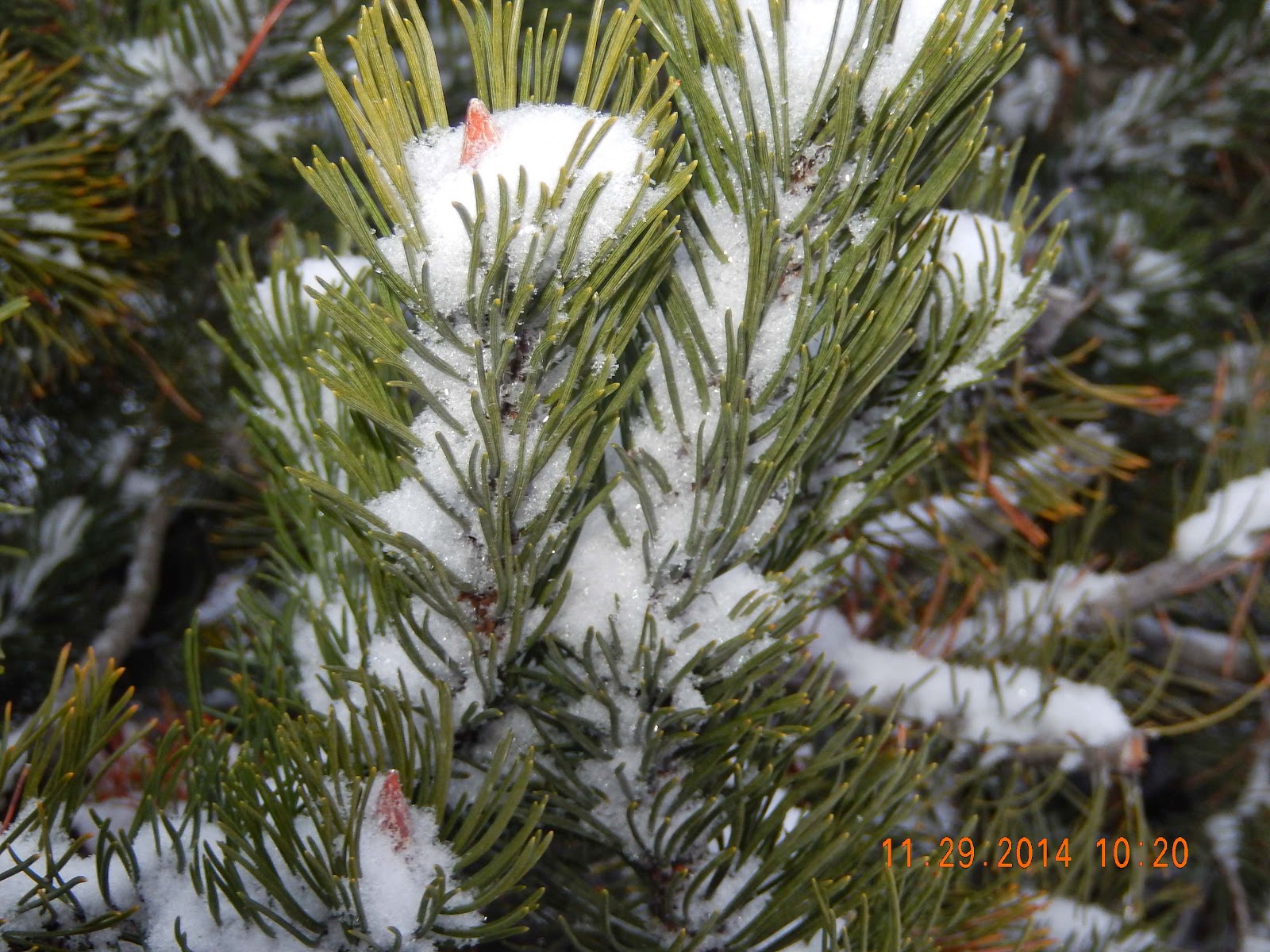