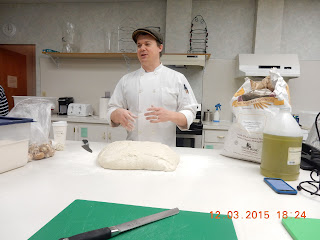 Fire Island Bakeshop is adding new breads to its repertoire, made with wheat from Ben VanderWeele's farms in the Knik Valley. I wrote about VanderWeele's Farm's wheat last July. 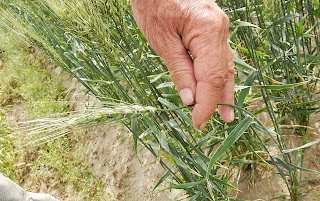 Ben VanderWeele shows off a stalk of green wheat in July, 2015, about six weeks before harvest.

Carlyle Watt, head baker at Fire Island, said that the new breads will go on to the menu in March, 2016, baked twice a week.  The VanderWeele wheat has about 10% to 12% gluten, perfect for Fire Island's whole wheat sourdough loaf. He also plans to use the Alaskan wheat in other breads, experimenting each week with new possibilities until he achieves a texture and taste that he likes. 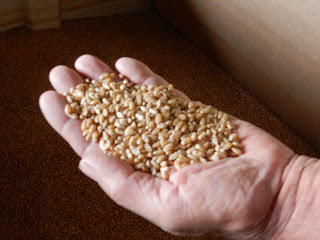 Ben VanderWeele with a  handful of his 2014 crop of wheat.

We talked about several aspects of wheat farming, and how they shaped Fire Island's choice to buy local. I asked about "organic" versus "natural, " knowing from my conversation with Ben VanderWeele last July that his wheat is not organic. Ben said at that time that Alaskan farmers have very few diseases in the soil, or natural pests, because agriculture is so new to the state. Although most of the Valley farmers supplement the minerals in the dirt with fertilizers, few use pesticides.

Carlyle's view is that although he would prefer organic, VanderWeele wheat has a low "carbon footprint," no pesticides, supports the local economy, and helps create more sustainable food supplies for Alaska. He said that Fire Island weighs all of those factors and more in deciding how to most ethically choose their flours and other ingredients. Eventually, he thinks that tasting the freshness and unique flavors of the Alaskan wheat will increase the market, and in the long run make it more feasible for local farmers to grow organic foods. 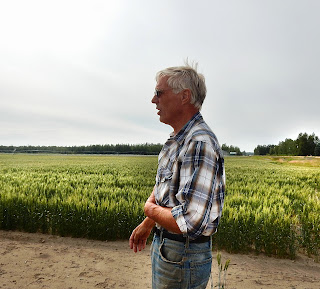 Carlyle showed me the bakery's table-top mill that they use to grind the wheat, as well as for other grains -- wheat's cousins, emmer, einkorn, and spelt, and for rye. We talked about the difference between fresh-milled flour, and flour that's been "aged" by sitting for a couple of weeks before being used for baking. Fire Island uses both types, for different purposes -- the aged flour is better for pastries and some types of breads because it gives an open and airy "crumb" (the interior texture of the bread). The VanderWeele wheat will be fresh-milled and used immediately to capture flavors that otherwise change as the flour ages. The bread's texture will be a little denser, but complex in taste. 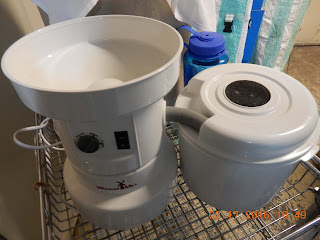 Fire Island's table mill for wheat and other grains.

The mill grinds two to three pounds of whole grains at a time, and takes a couple of minutes to turn them into flour. It gives a choice of grinds, from fine, for pastry, to a grind that maintains more of the bran. Carlyle said that if the grain is at room temperature when it goes into the mill, the flour comes out heated to about 100 degrees. To keep the flour from overheating, which changes the flavors, the bakery stores its grains out of doors in the winter and refrigerates them in the summer. 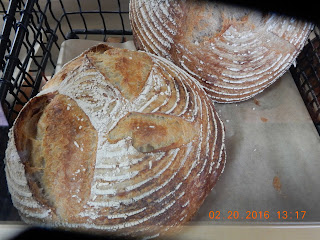 These are Fire Island's Rustic Wheat loaves; the new breads with local wheat will be similar.

We discussed the sourdough starters, and how they interact with the different grains. Carlyle said that sourdoughs, also known as natural yeast starters, are individual. A batch of yeast starter fed on rye flour has a distinctly more intense smell (Carlyle describes this as "funky" which in the baking business tend to mean something earthy and dark) than one fed on whole wheat, or on white (wheat) flour. Of the three, the white flour starter is often almost sweet in scent, while the whole wheat and rye are sour and can be intense. Fire Island's sourdough whole wheat breads will be made with the whole wheat starter, to highlight the flavors. He added that Fire Island has a number of customers who are sensitive to commercial yeasts, but who are fine with the sourdoughs made with the natural yeasts. 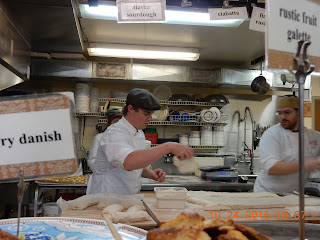 Carlyle weighing chunks of dough to assure that each bread loaf is the same so that they bake evenly. 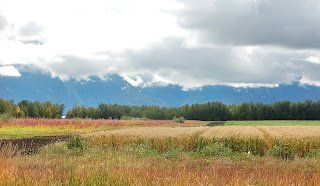 Ben VanderWeele's wheat near harvest time, September 5, 2015, with the Chugach Mountains in the background.

Fire Island Rustic Bakeshop has two shops now, at 1343 G Street, near downtown Anchorage, and at 2530 East 16th Avenue, just off Lake Otis and DeBarr. They are open Wednesday through Sunday, 7:00 a.m. to 6:00 p.m.; closed Monday and Tuesday.


Hungry for beauty and pasta? Head for Eataly in Manhattan to see Luca Donofrio's creations. Here's the article:

Food and art go hand in hand, and Luca Donofrio proves it with his mouthwatering pasta creations. Every week, he oversees the manufacturing of 5,000 pounds of pasta for Mario Batali’s gourmet food market, Eataly. To Donofrio, these tiny edibles are simply a form of artistic expression, an attitude he’s adopted thanks to his creative background. Before pasta, he attended New York’s School of Visual Arts with the intention of becoming an oil painter, but he found it hard to make a living after graduation. That’s when he turned to Eataly, starting as a sales associate and working his way up to manager of pasta production.
Since working with pasta, Donofrio has discovered that it’s his number one passion in life. “There are hundreds and hundreds of different kinds of shapes and options—you can do anything with it,” he told the Instagram blog. His feed features delectable dough that’s been pinched, rolled, bow-tied, crimped, and much more. The behind-the-scenes photos of Donofrio’s handiwork will make you appreciate the artistry of pasta, and probably make you hungry, too.