Wheat reports from the Midwest, spring 2013 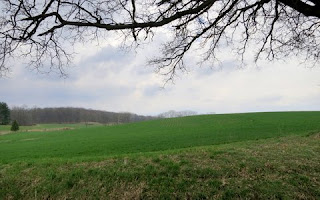 This spring, as every spring for thousands of years, people have looked at the sky, and felt the ground for warmth, and  wondered how soon they could plant. In some areas, they look at their winter wheat crops, the only thing growing during the first spring days.

For a blog about wheat, it makes sense to follow the wheat as it grows around the U. S., and the world. Wheat is something of an experimental crop in Alaska fields, so I sweet-talked a couple of my Midwest sisters into taking some pictures of winter wheat fields in Michigan and Ohio. Throughout this summer and fall of 2013, I plan to post regularly about wheat crops and harvest around the world.

Wheat, unlike most grains, can be planted both in the spring and the fall. Called 'winter wheat" when it's sowed in the mild autumn days, it goes dormant over the winter. As soon as the fields warm up, the leaves turn green and begin to grow again. Moistened by the snows, and ripening early, winter wheat escapes the scorching midsummer days. 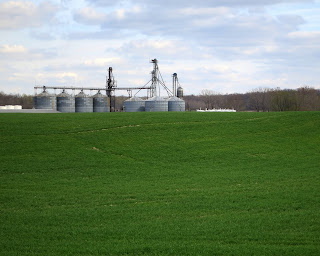 I grew up in Berrien County, Michigan, noted for its fruit orchards, and (these days) vineyards. Turns out that wheat of any sort is not a prime crop there -- the weather's too wet, usually. The farmers who grow it use it mainly for livestock feed. A Michigan State web site with information from 1996 and 1997 showed that the county had somewhere between 500 and 14,999 acres planted in winter wheat in 1996 and 1997, and a harvest of 51 to 69 bushels per acres in 1997. A data site for Berrien County noted that farmers harvested just 2,617 acres of wheat (which might have included some spring wheat) in 2011, compared to 41,400 acres of corn and 51,400 acres of soybeans. The sister who lives on a poultry farm there will be sending along progress reports for Wheatavore.

Another sister who lives in Ottawa County at the northwest corner of  Ohio, has also been pressed into service (I'm working on the Iowa sister for more photos). Ottawa County near Toledo has its own share of winter wheat fields. But just as with Berrien County, the Ottawa County land use map shows that corn and soy fields cover much more acreage than winter wheat. 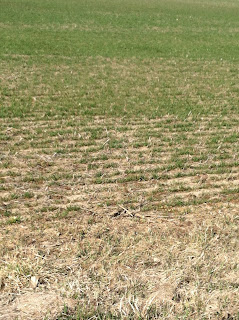 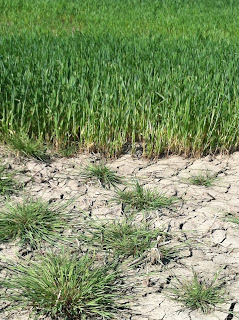 Another winter wheat field on May 19, 2013, also dry, but the wheat's much taller [photo by Betsy Slotnick].


We'll be reporting regularly on these wheat fields and others -- their weather, the pests, the commodity prices on the markets, and more. For instance, this site shows the prices for wheat delivered at different times in the future, and tells who's buying what, for May 23, 2013:

Wheat futures are trading 9 to 10 cents higher at midday in Chicago. Japan is tendering for 122,222 MT of milling wheat this week, of which 67,897 MT is specified US origin white, HRW and DNS wheat. Results are due on Thursday. Ag Canada raised projected Canadian wheat production to 29.4 MMT, going above the USDA estimate of 29 MMT which was in turn based on Stats Canada (different agency) data.  Algeria bought 50,000 MT of soft wheat for August from the EU. USDA is expected to show net US weekly export sales of 400-700,000 MT for last week. May 31 is the last day for old crop wheat to be shipped.

None of them are in the market for Berrien County wheat, or Alaska wheat either, but it provides another perspective on one of the world's oldest crops.