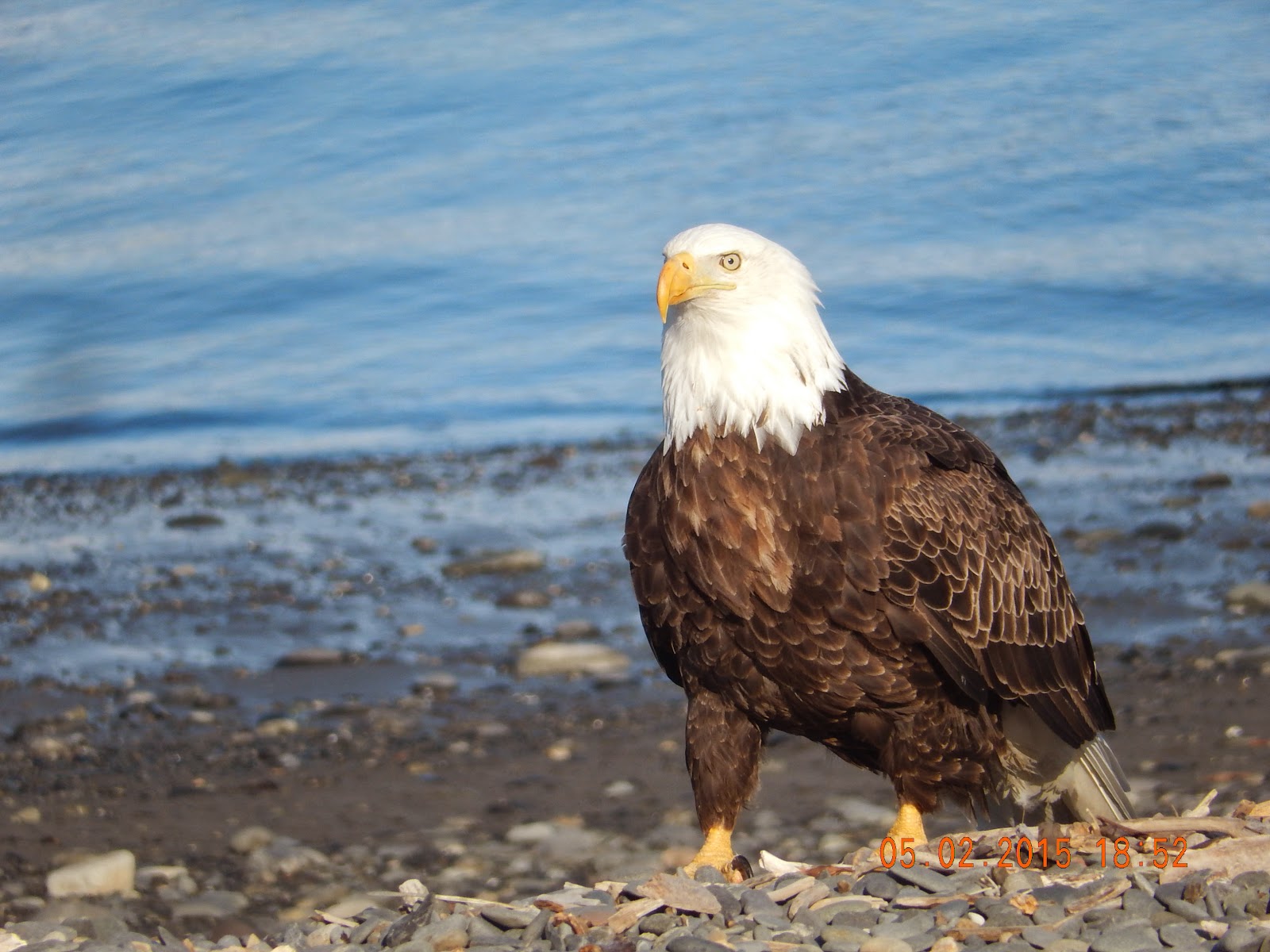 Eagle on the beach at Land's End in Homer, about fifty feet from the restaurant window. It sat for quite a while, then joined several other eagles down at the water line for a fish gut dinner. 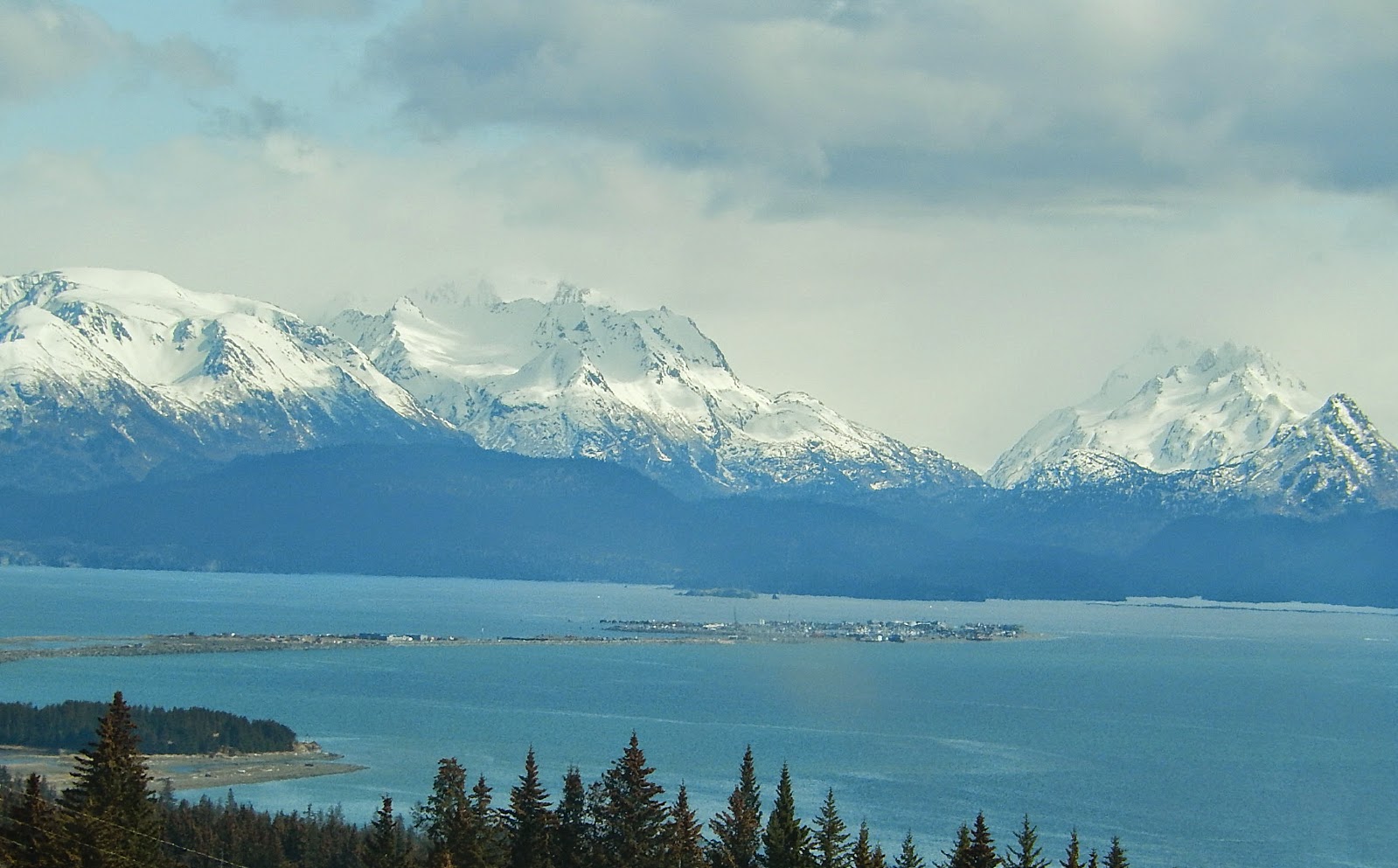 The Homer Spit, seen from the hill above town. Land's End, with the eagles, is at the very end of the Spit. 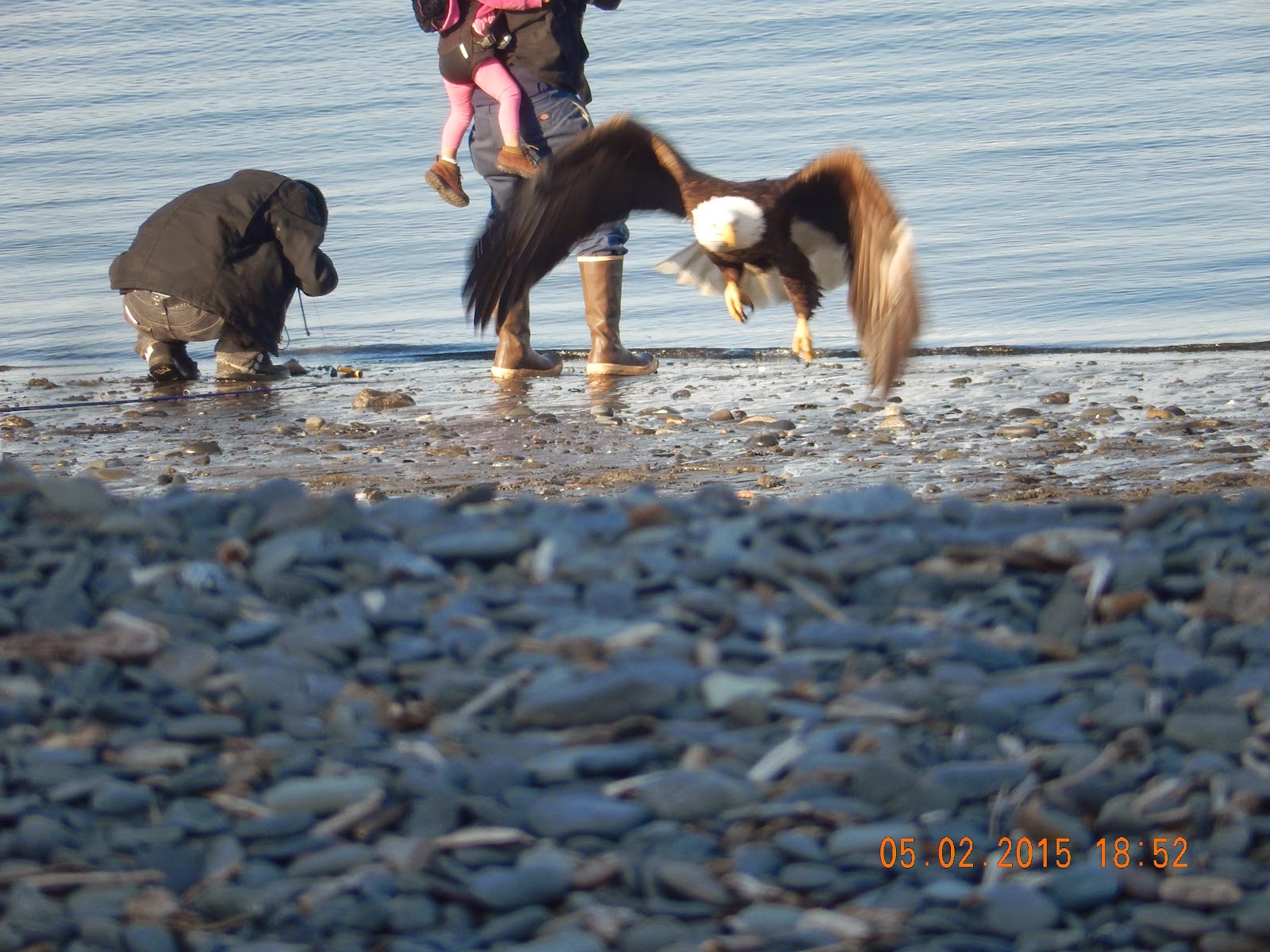 Eagle coming into settle on the beach. More about that little kid in the back sling after the eagle photos. Two adults and a juvenile. The adult to the left has the prize, fish guts. The adult in the middle is waiting his turn (later, there were three adults with enough for all of them), and the juvenile (no white head) to the right should probably think about getting dinner elsewhere.

Later, there were three adults, not much interested in the photographers. 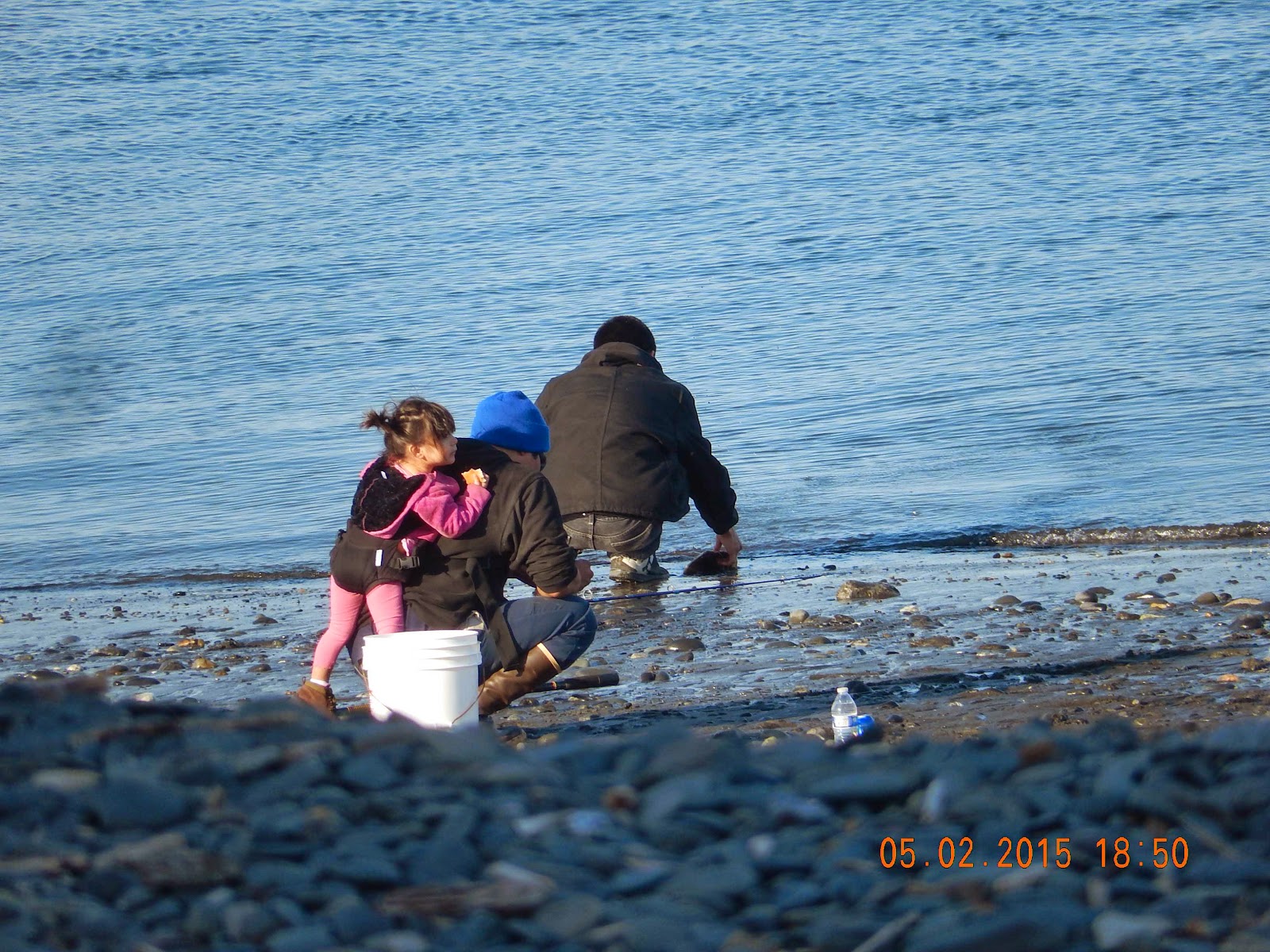 The guy in front is cleaning a fish that he just caught (possibly the source of the fish guts that the eagles were so interested in). The guy in the back with the little girl on his back was fishing with her for an hour or more. 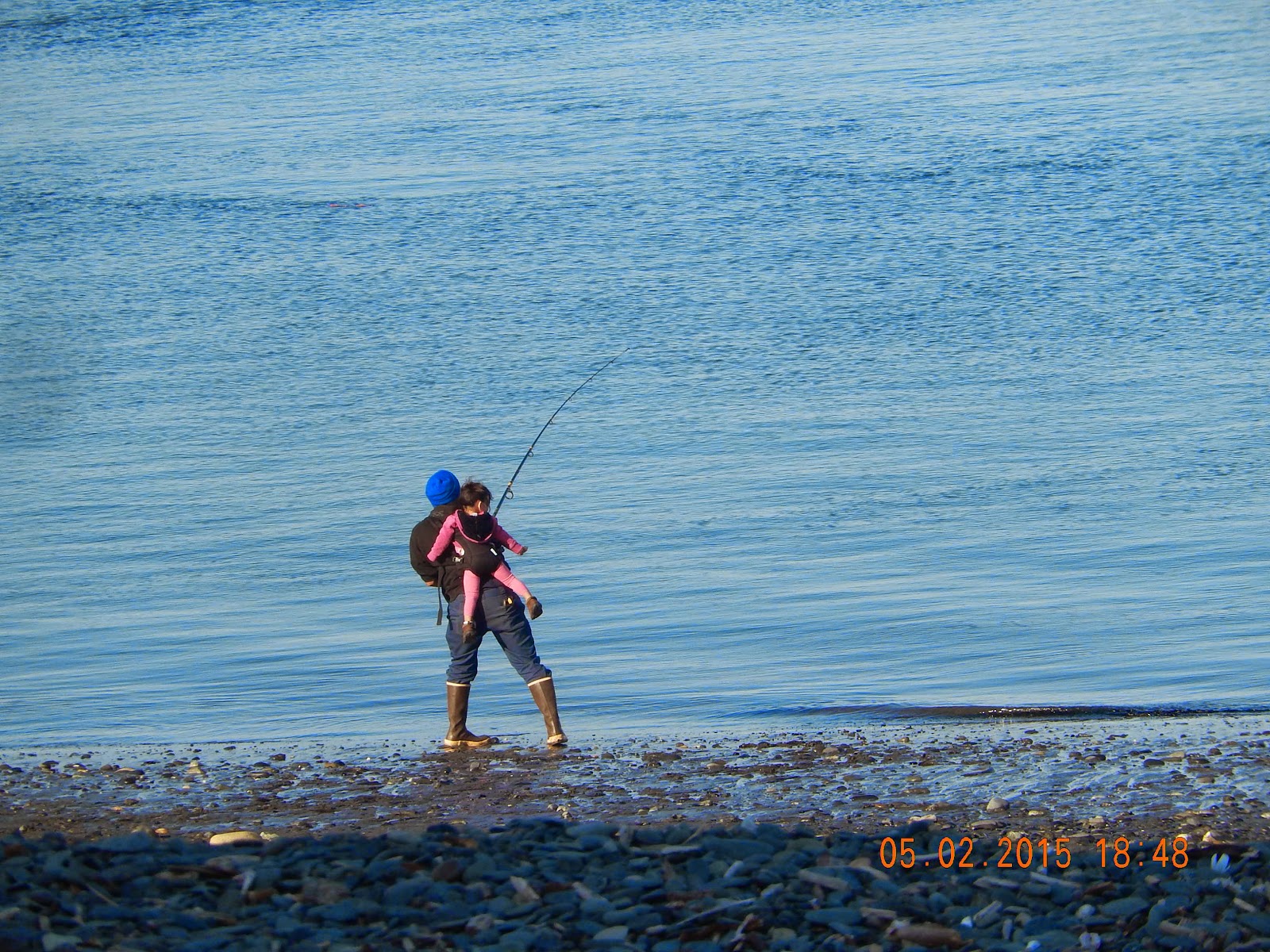 She seemed fine with it. Eventually he caught a fish (did not see what kind), and handed the child off to someone else while he cleaned the fish. A dozen or so people were fishing at low tide. 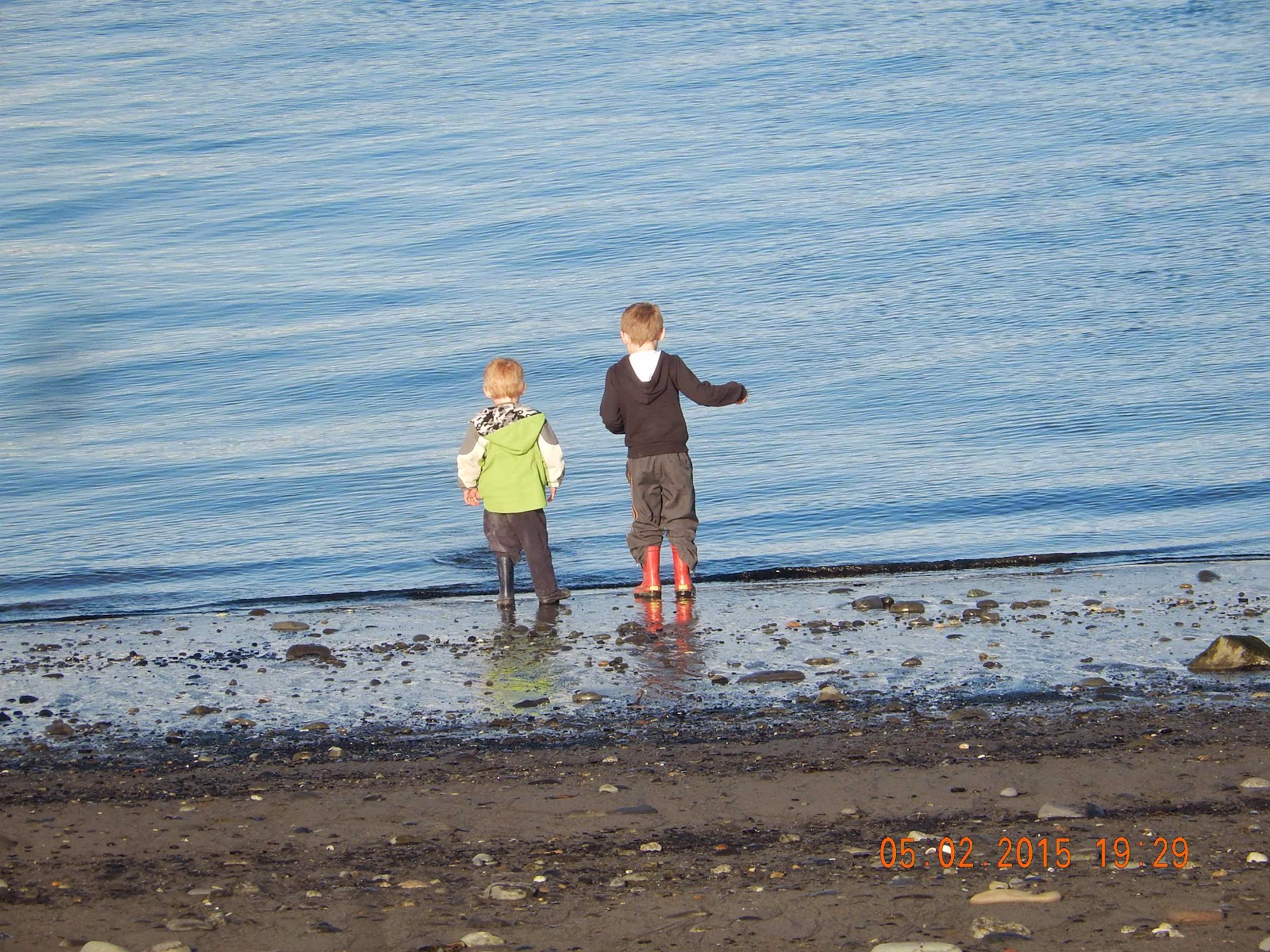 Other beach action -- kids skipping rocks. Land's End is one of the best-anywhere skipping rock beaches, covered with flat rocks of just the right shapes, and with an approachable water line. 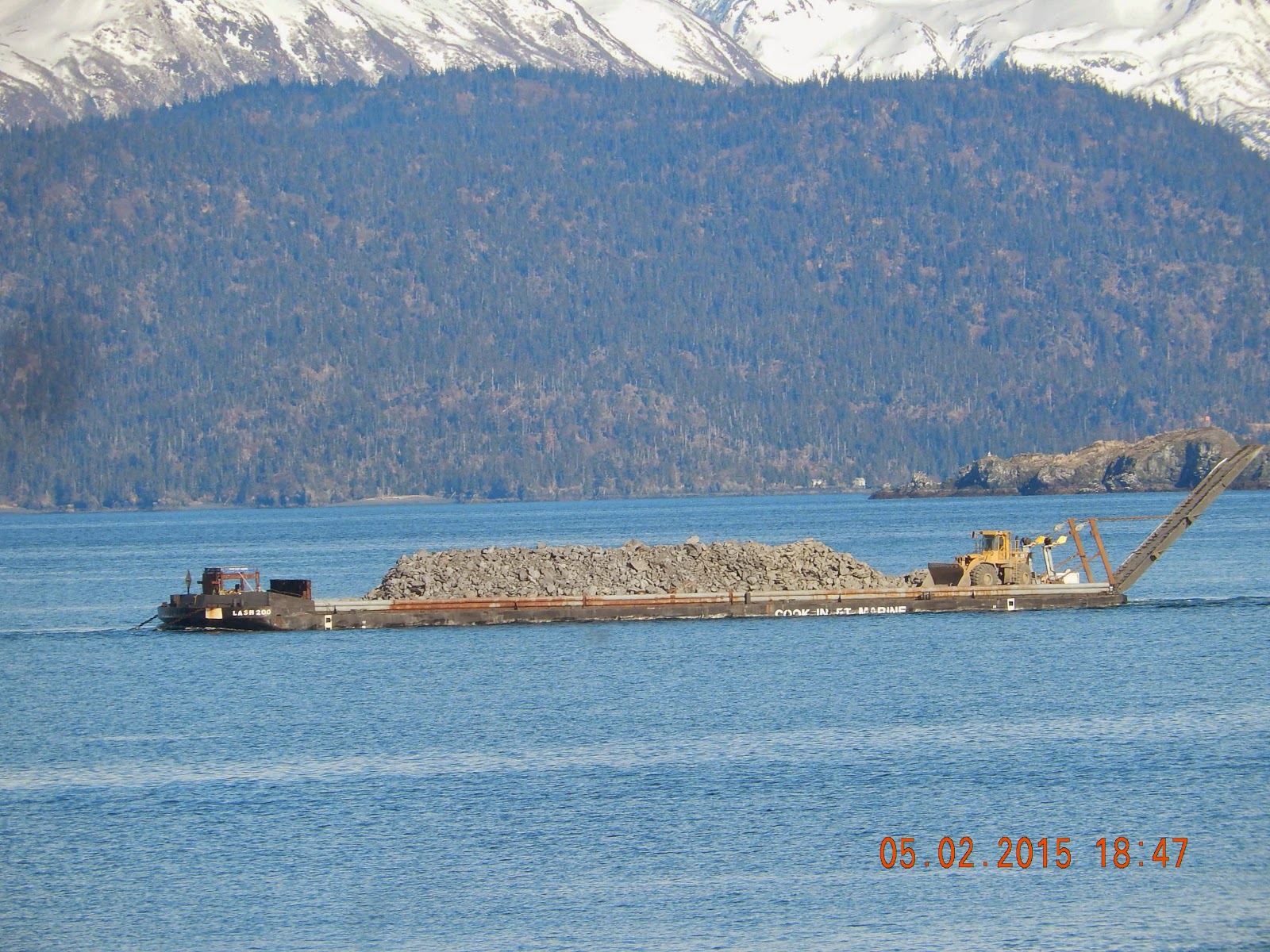 A tug (out of the photo) was pulling this boat, from Cook Inlet Marine. It appeared to be hauling a load of rocks and dirt, along with a bulldozer into the east end of Kachemak Bay. 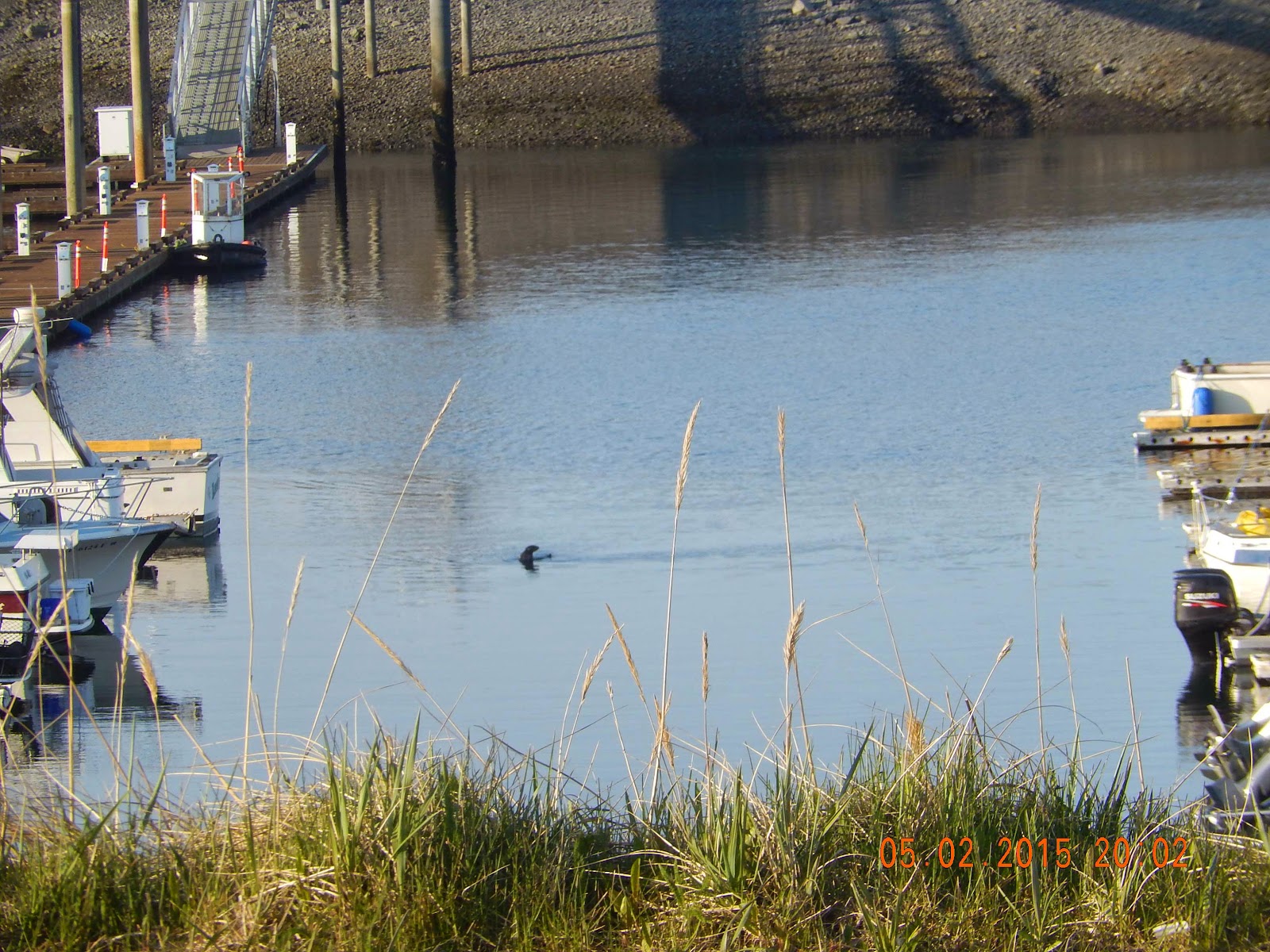 Elsewhere in Homer, a sea otter in the marina. 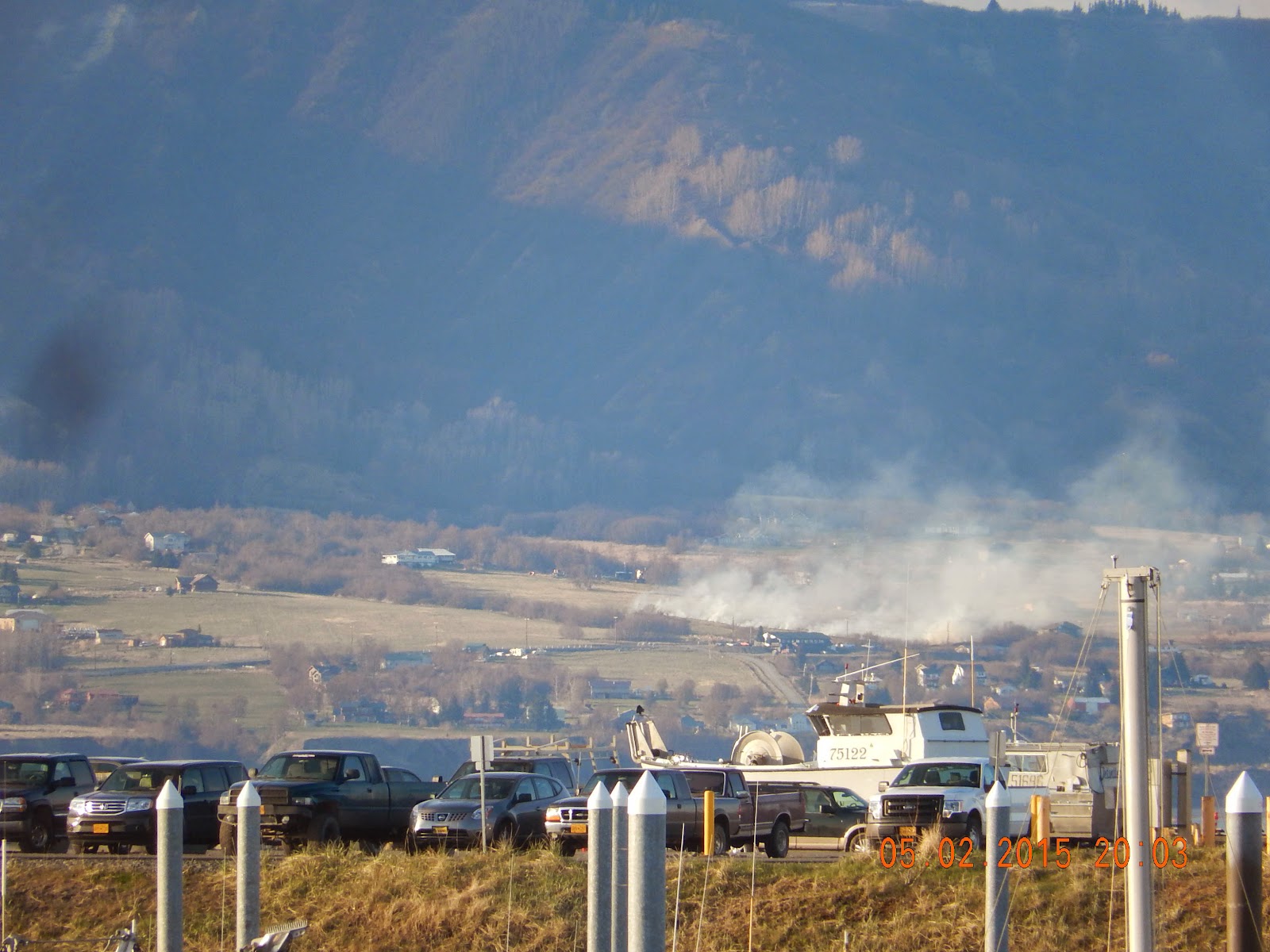 Looking from the Marina on the Spit at smoke on the other side of the bay, down the bluff from East End Road. 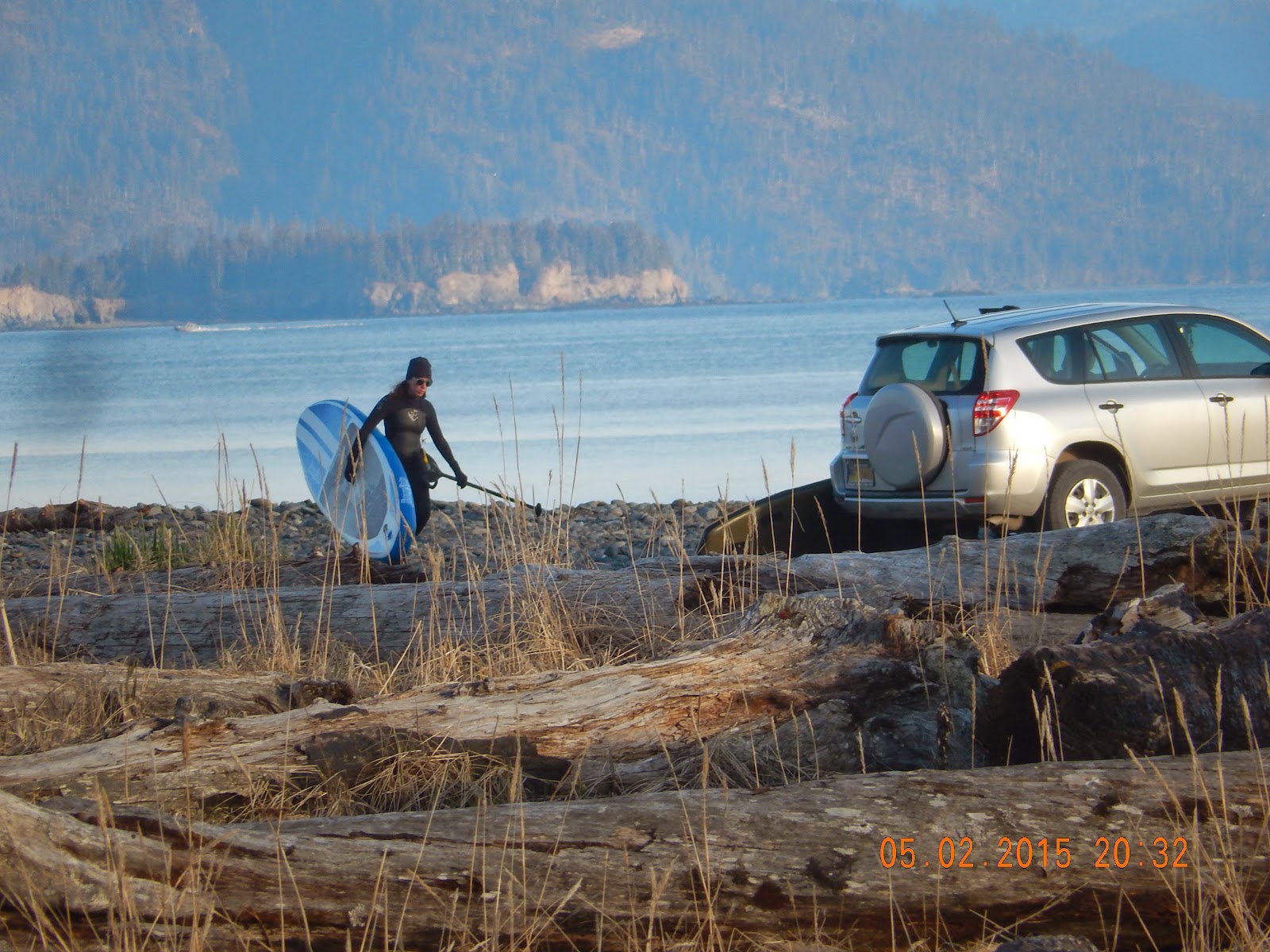 Paddle boarders coming in for the evening, at Bishop's Beach. 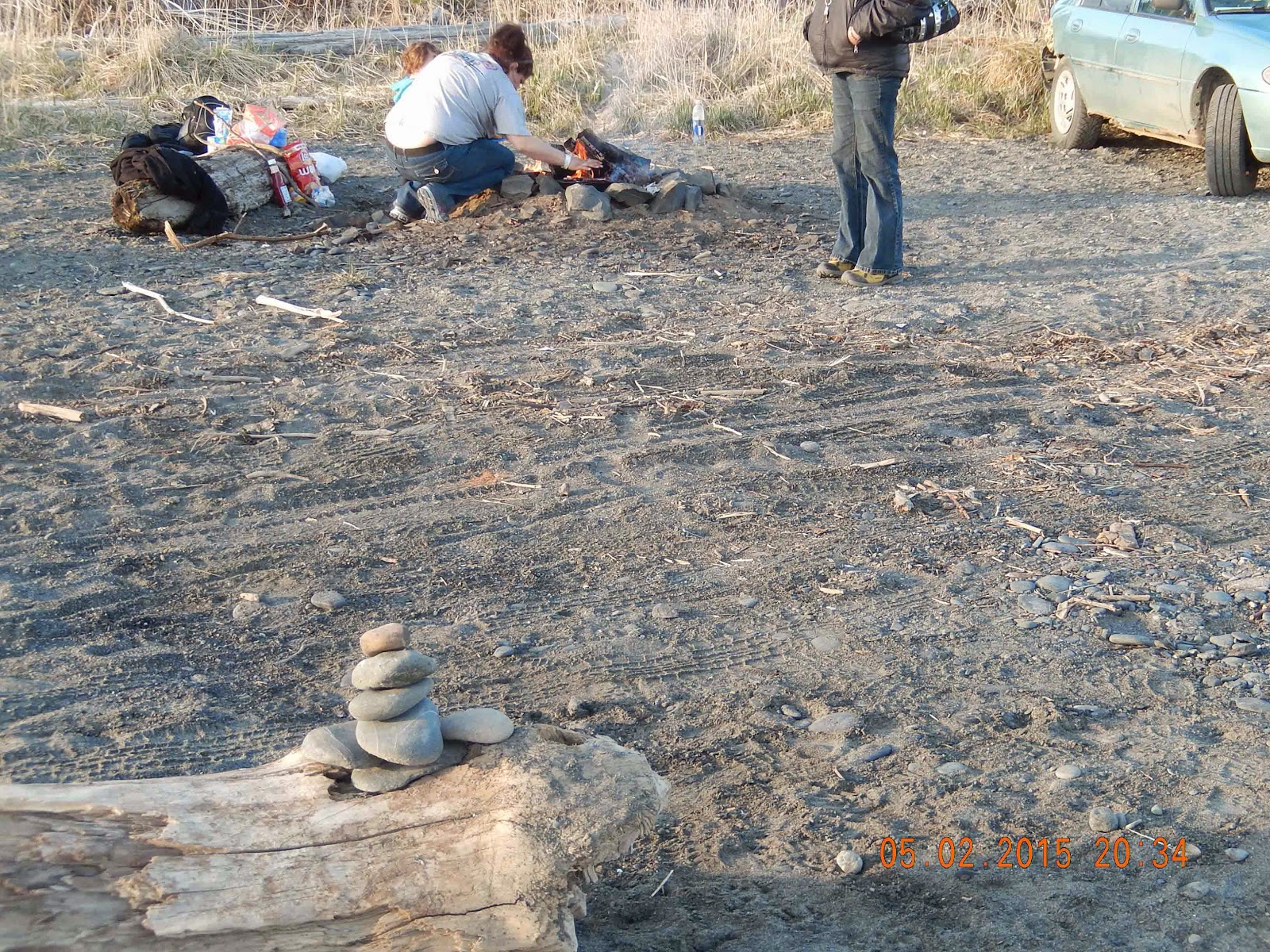 A bonfire, and a cairn on driftwood, at Bishop's Beach. 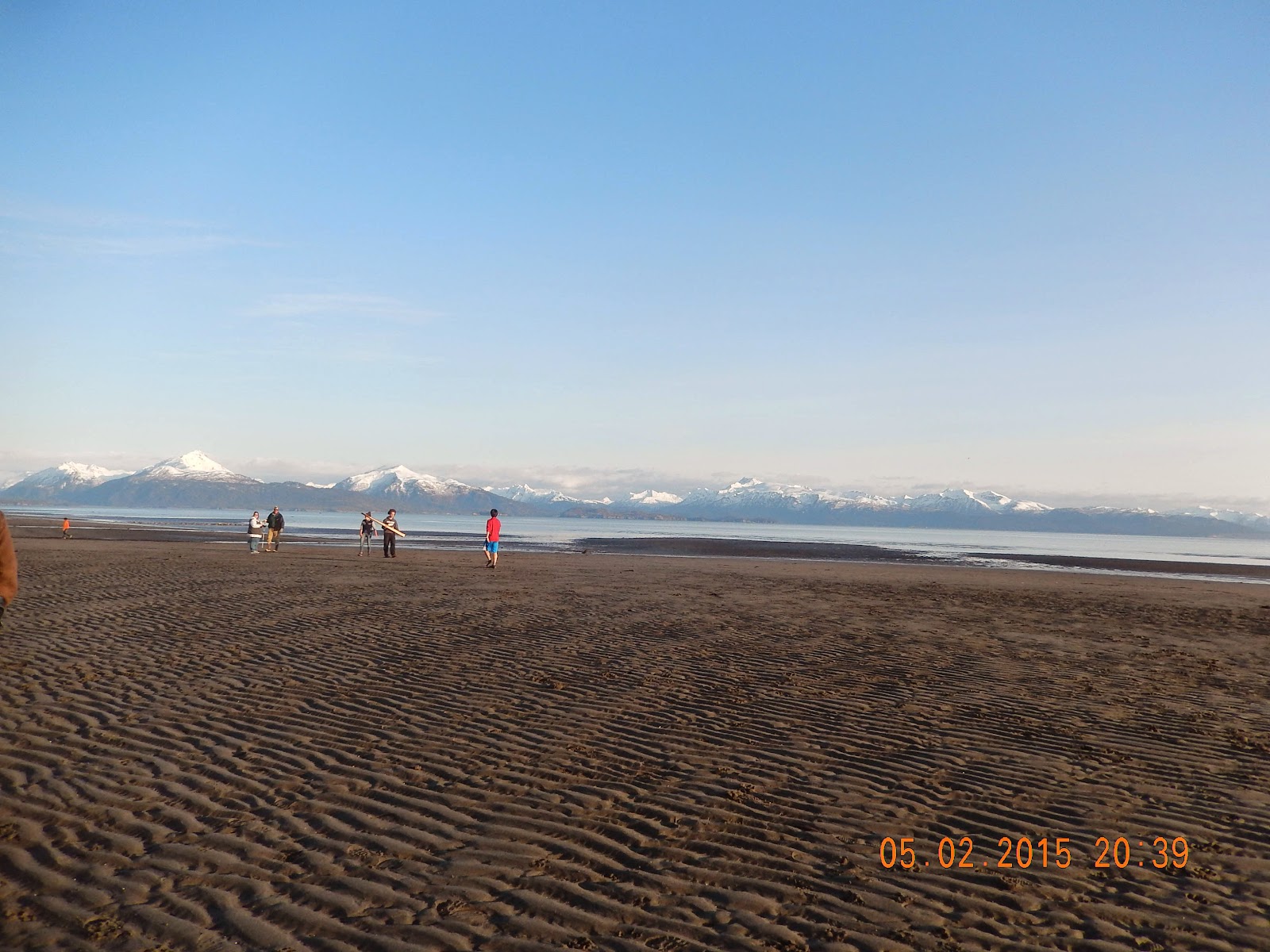 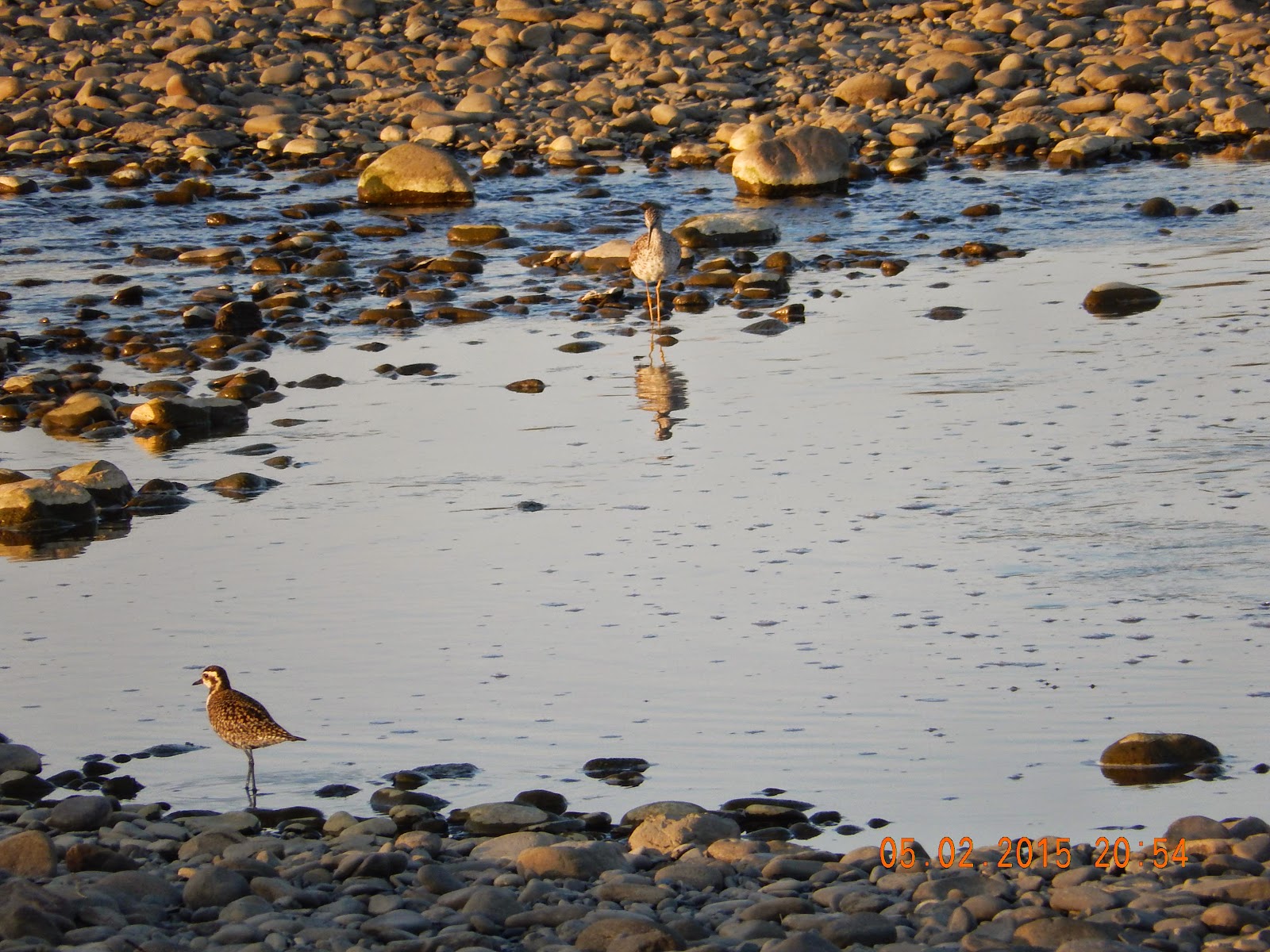 A pair of Golden Plovers at Bishop's Slough. We had hoped to see swans and sandhill cranes, but haven't seen either. On the other hand -- we saw these, and the eagles. We've done fine. 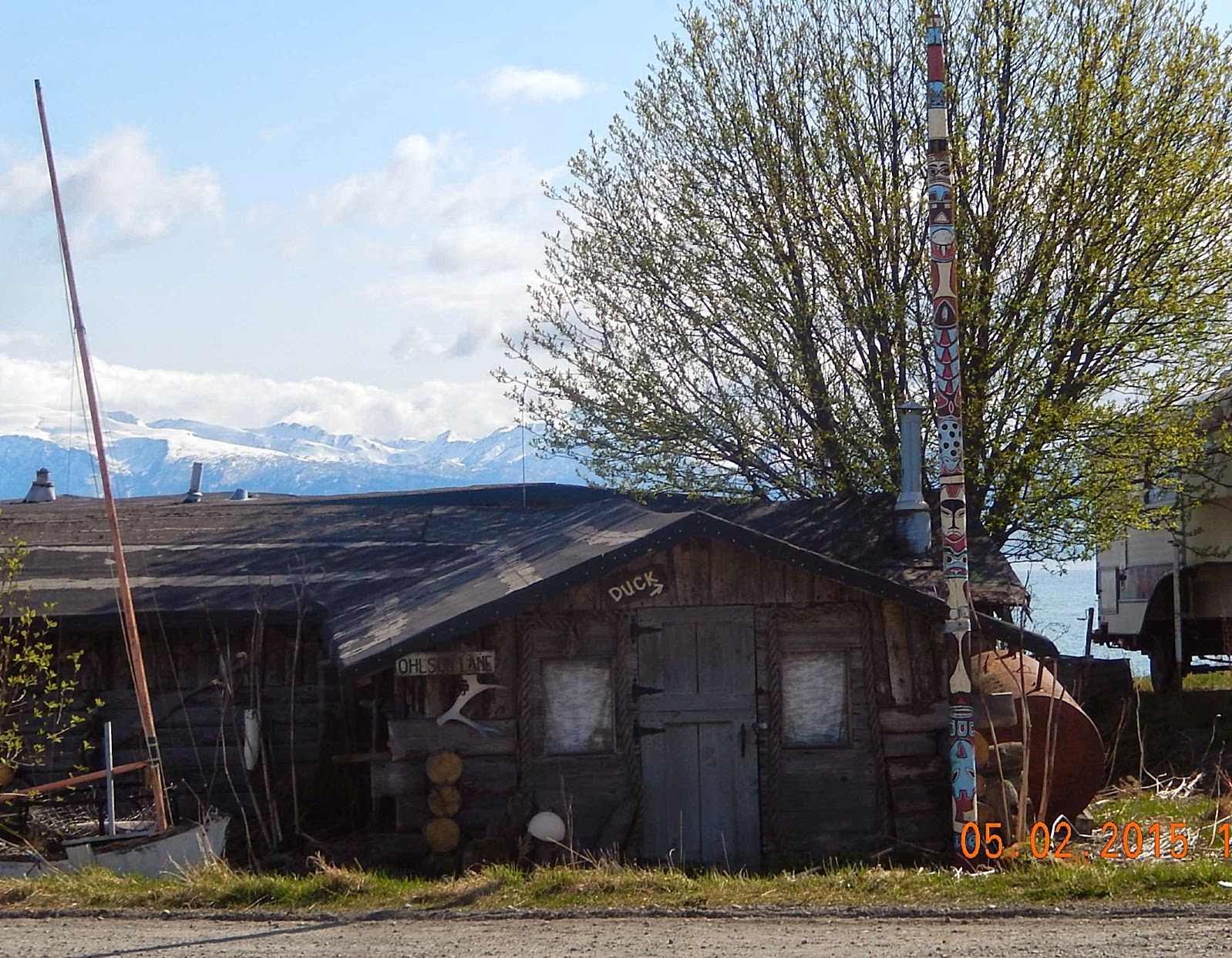 Our window at the Driftwood Inn overlooks this odd little cabin that sits between Ohlson Lane and Bishop's Beach. The trees are leafing out in Homer, but along most of the drive through the mountains and along Cook Inlet spring is two weeks behind Anchorage -- hardly any green. 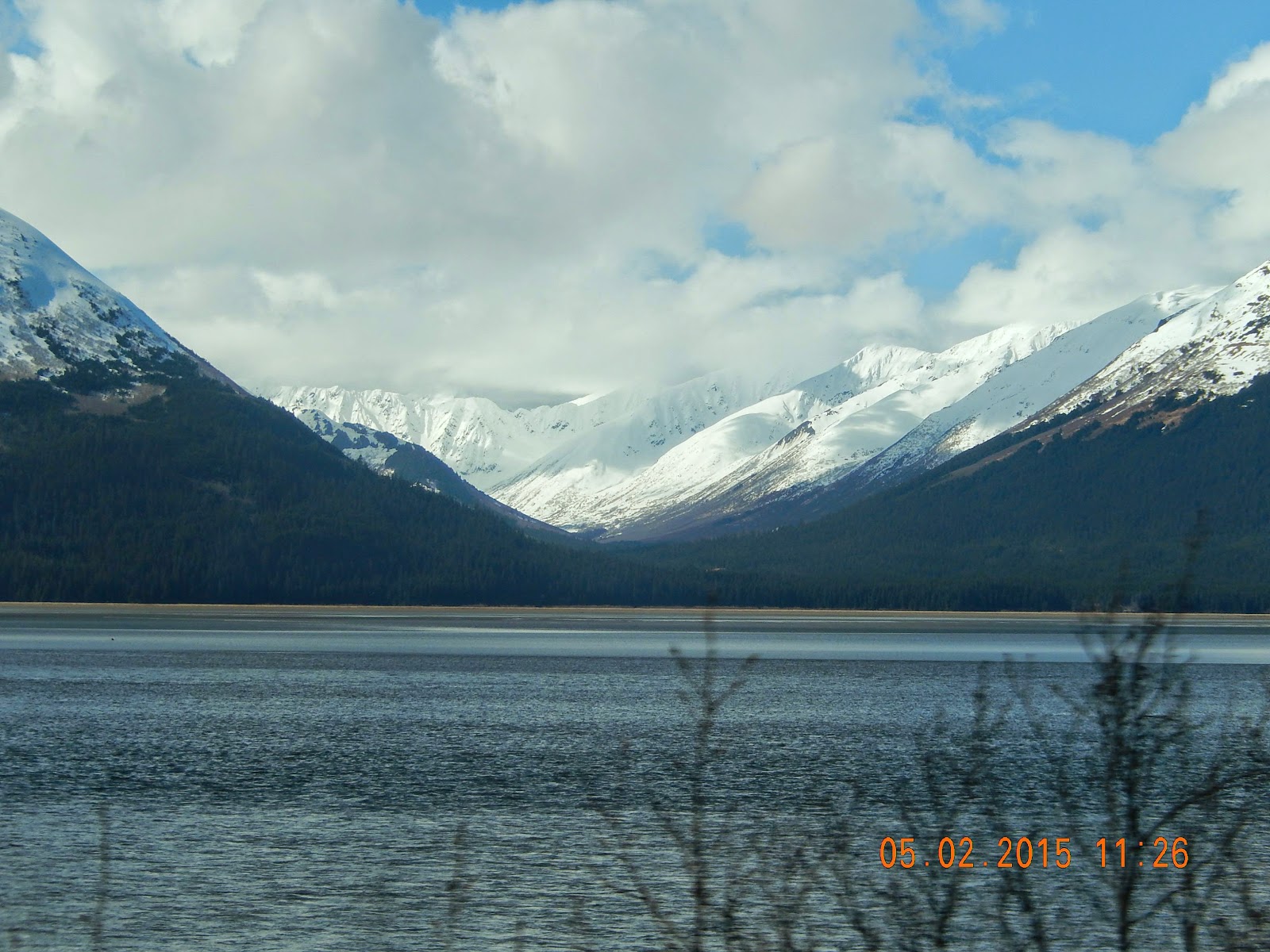 On the way down to Homer, the drive along Turnagain Arm, with mountains and ocean. One of dozens of photos -- hard to stop taking them, because each view seems spectacular. 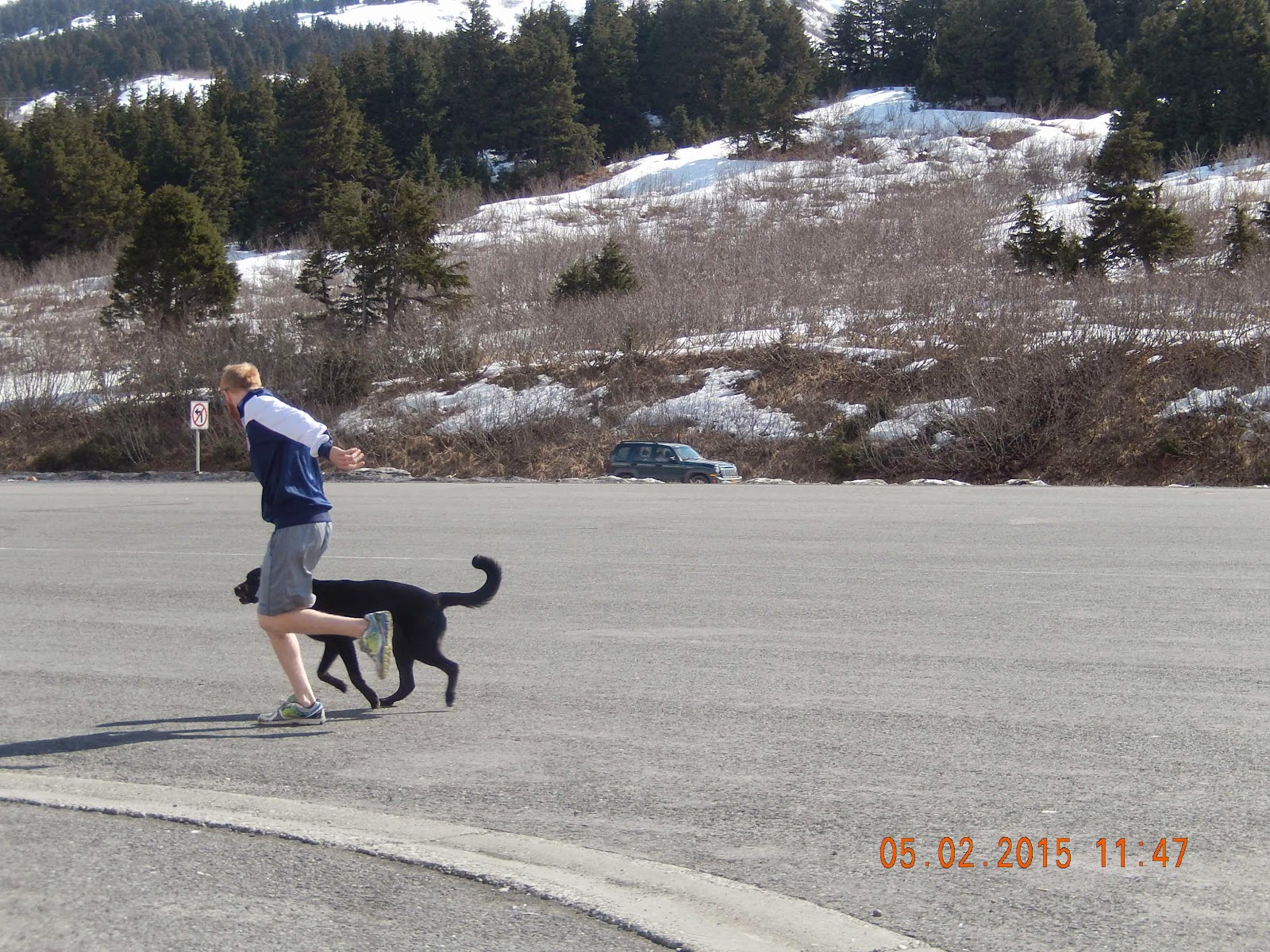 In the parking lot at Turnagain Pass. Enough snow on the north side of Turnagain Pass that we saw a group of people heading out (on skis? snowshoes? just saw them briefly) across it for a hike. Only a few small patches of snow left on the south side of the Pass. 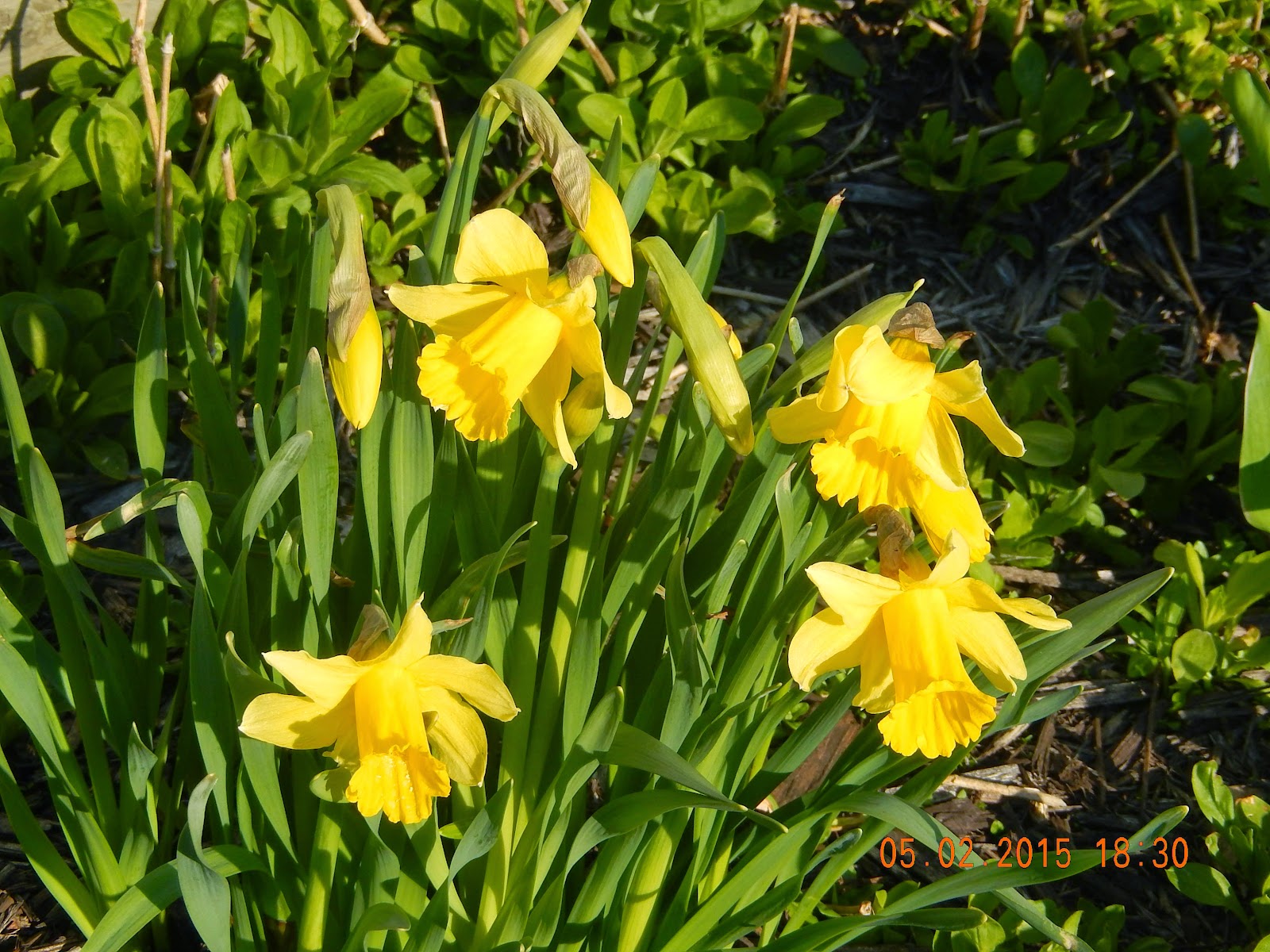 Daffodils at Land's End Hotel. Spring has reached Homer, but isn't as far along as Anchorage.